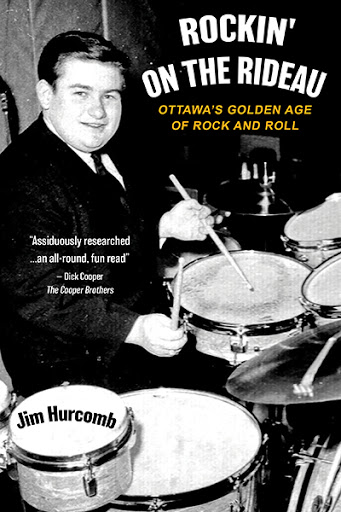 The music world exploded into Technicolor on February 9, 1964, when the Beatles appeared on the Ed Sullivan Show and ignited the music phenomenon dubbed “The British Invasion”. In the weeks and months to come, hundreds, perhaps thousands, of Ottawa teenagers put away their hockey sticks and picked up guitars, starting up bands in basements and garages, with visions of screaming girls and stardom dancing in their heads. For some, that dream came true, in packed High School Gymnasiums, Church basements, bowling alleys and every other venue they could find. Groups were working three or four nights a week on both sides of the Ottawa River. The Esquires, The Staccatos, The Townsmen, Don Norman and the Other Four and many others cut records that were as good as anything coming out of Britain or the States. DJ's Gord Atkinson, Nelson Davis and Al "Pussycat" Pascal make them stars by playing their records. Sandy Gardiner followed their exploits in his weekly "teen" column in the Ottawa Journal, and we checked out the weekly "Swing Set" to get the lowdown on the newest groups.

From the day Elvis Presley came to town in 1957, to the release of The Five Man Electrical Band’s mega-hit “Signs”, we relive those memories with the bands, the clubs, the concerts and the colorful cast of characters who made it happen. Pull back the curtain on the magic of "Ottawa’s Golden Age of Rock and Roll”,

“…Hurcomb’s obvious affection for, and knowledge of, this period in Ottawa’s rock ‘n roll history permeates his narrative. Assiduously researched with clever cultural insights and an engaging presentation make for an all-round, fun read.”

“Rockin’ on the Rideau” brings back a flood of memories of many old friends and some great musicians of the era. It was a time of fun and joy filled with great music. I know people will thoroughly enjoy remembering the fun from those happy days. Thank you Jim for jogging our memories with this glimpse into the past, and for writing a fun book.”

“A thorough documentation on the evolution of Rock 'n Roll music in Ottawa, 50's - 70's. A must-read for musicians and music fans, current and past. It is a very good read. It refreshed my memories about the local music scene and I learned a lot from the musicians perspective.”

"Rockin’ on the Rideau is a must-read for enthusiasts of music legends whose timeless songs topped the record charts from the fifties to 1970, and were instrumental in putting Ottawa on the map as an incubator of rich musical talent.”

Unless your mom hid your transistor radio in 1973 and still hasn’t given it back, chances are you know who Jim Hurcomb is.

From 1973 to 1980 Jim was one of the most popular voices on CKCU-FM, Radio Carleton, Ottawa’s first cool FM station. From 1980 – 2000 he hosted a number of programs on CHEZ-106, including the afternoon variety show “In The city”, the very loud “Power Chords” and the flagship “Morning Show”, first as half of “Geoff (Winter) and Jim”, and later “Jim and J.R. (John Rogers). Then it was 8 years at CFRA co-hosting “Middle-Aged, Bald Guys” with Al Fleming. These days, some 47 years after pushing that first button, Hurcomb is still behind the microphone, hosting and producing “The Sound of the Underground” on LIVE88.5, heard Sunday nights at 9.

Away from radio, Jim is deeply involved in other aspects of music, as a musician, teacher, music trivia host and writer. “Rockin’ on the Rideau” is his first book. If you like this one, there may be a "Rockin' On The Rideau: The 70's" late in 2021.

Rockin' On The Rideau has been nominated by our staff as one of their favorite books.