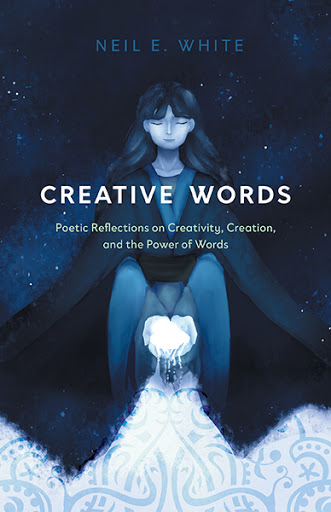 Creative Words
Poetic Reflections on Creativity, Creation, and the Power of Words
by Neil E. White

Words can describe reality, but they are also capable of creating new purposes, behaviors, shapes, and meanings. The poems in Creative Words are a part of the author’s own search for something expansive and deep in our relationship with God, the world, and one another.

In many religious traditions, wisdom and words are active forces in the creation of the cosmos. These poetic reflections celebrate the connection between creation and creativity, imagination and inspiration, myth, wonder, feeling, and the strange and mysterious power of words.

Here the inquisitive reader will find a mixture of moods and topics, and a sense of balance; the poems can talk about depression and anxiety but also hope and joy. These poems are neither universally optimistic nor brooding.

Although deeply formed by faith, most of the poems in this collection are not overtly religious. This is poetry for religious and laypeople who enjoy creativity, poetry, and words.

"Creative Words is a meaningful poetry collection whose layered creativity shows how emotions, ideas, and artwork interact with each other....The book's openhearted and sincere language is appealing...no syllable is wasted."

Reverend Neil E. White is the Senior Pastor for Rejoice Lutheran in Frisco, Texas, which allows him the freedom to explore his diverse interests. Self-described as an avid reader and a geek, Neil is particularly interested in creativity and the power of words, seeking wisdom in both ancient and modern sources, and exploring what makes life worth living.

Neil grew up in San Antonio, Texas, and received his undergraduate degree in Civil Engineering at Texas A&M University. While an officer in the U.S. Army, he discerned a call into ministry. He attended Wartburg Theological Seminary in Dubuque, Iowa, and served congregations in Arkansas, Oklahoma, Nebraska, and Texas.

In 2012, he began writing a blog, signoftherose.org, and experimented with poetry as a part of that writing to explore a range of religious and secular topics. Creative Words includes many of the poems favored by his blog readers.

He lives in McKinney, Texas, with his wife, Carissa, two dogs, and a ferret.