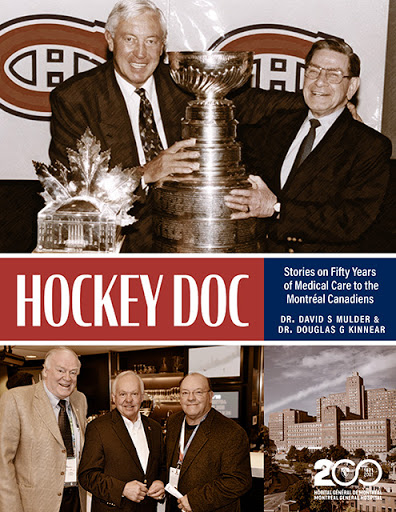 The Western Division of the Montreal General Hospital was so close to the Forum that Montréal Canadiens players could put on skate guards and walk to the hospital’s emergency room. This was not a coincidence and established proximity as a priority.

Dr. Douglas Kinnear supported twelve Stanley Cup winning Montréal Canadiens squads as team physician. Dr. David Mulder has been on the medical staff for over fifty years and for eight Stanley Cups. In Hockey Doc, these two legendary team physicians explore the dynamic doctor player relationship they came to know so well with a look at more than fifty years of medical care provided to the hockey club.

Hockey Doc examines how the medical program for the Montréal Canadiens has evolved over its history due to its long-standing relationship with the MGH and the Molson family. The doctors breakdown major injuries with real-life examples that every team physician needs to be aware of and share career highlights. Featuring stories about Saku Koivu, Trent McCleary, Patrick Roy, Maurice Richard, Gump Worsley, Bobby Orr, Lou Lamoriello, and journalist Red Fisher – among countless others – Hockey Doc shares the inside jokes between doctor and player while providing a greater commentary on the evolution of sports medicine throughout two MGH doctors’ careers.

For hockey fans of all ages and the Québec medical community, Hockey Doc shares the relationship between the injured professional athlete and the medical staff of a university medical centre and provides an inside look at the injuries and illnesses these doctors have faced over their storied careers.

Dr. David S. Mulder has been a part of the Montréal Canadiens medical team since 1969, first covering the Montreal Junior Canadiens. Born in Eston, Saskatchewan, Dr. Mulder grew up playing hockey and continued while studying pre-med at the University of Saskatchewan where he continued on to the College of Medicine. He moved to Montreal with his wife after receiving a handshake instead of a contract that he had a job waiting for him after medical school at the MGH. Dr. Mulder served two terms as Surgeon-in-Chief at the MGH and Chair of Surgery at McGill University before leading the Division of Cardio-Thoracic Surgery. Dr. Mulder lives with his wife, Norma, with whom he has three children and nine grandchildren – all Habs fans. He’s been called “the Jean Beliveau of sports medicine.”

Dr. Douglas Kinnear served as team physician for the Montréal Canadiens from 1962 to 1999. A native of Québec City, Dr. Kinnear attended McGill University for his medical degree and did a residency in internal medicine at the MGH before a fellowship at the Boston City Hospital specializing in gastroenterology. He built one of the premiere GI units at the MGH and pioneered the concept of flexible endoscopy for every portion of the GI tract. He served as Chairman of the Executive Committee at MGH and was Dean of Admissions for the McGill Faculty of Medicine from 1967-1971. Dr. Kinnear passed away at 92 in 2019. He is remembered by his wife Katie, their two daughters, and their grandchildren.