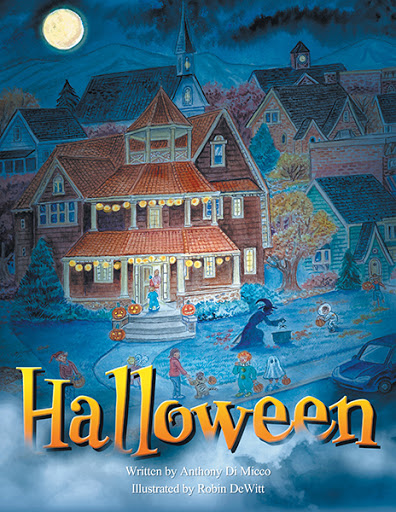 Halloween is a time of magic. Freedom. It’s a time when normal rules don’t apply and anything is possible. Add free candy to the mix, and it’s no wonder that so many children consider it the best night of the year.

But children aren’t the only ones who look forward to that magical night. Ghosts, goblins, witches, and werewolves—all the creatures of the night come out to play, and if you’re lucky, they might come visit you!

Halloween is a wonderful story, told in verse, celebrating the magic of Halloween night, as it was and as it still is today: perfect for the young … and the young at heart.

Author Anthony Di Micco was born in 1950, in the small town of Campodipietra in the Molise region of Italy. In 1957, as a small boy, he immigrated with his mother and younger brother to join his father in Canada. For two years, the family lived in Leamington, Ontario, before moving to Montreal, Quebec.

After acquiring a BA in Sociology from Loyola College, and a teaching degree at McGill University, he spent thirty-four years as an elementary school teacher before retiring, and now enjoys travelling and writing poetry.

Halloween is Anthony’s third published work, following two poetry anthologies: Expressions of the Heart and The Four Seasons: Beyond Autumn Leaves on the Other Side of the Moon.