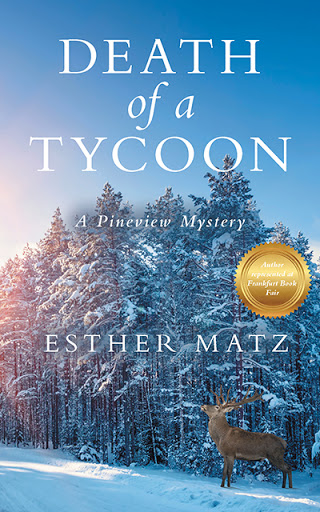 Death of a Tycoon
by Esther Matz

Shortly after wrapping up the case of a murdered judge in the small community of Pineview, the discovery of a body on the beach during her early morning jog plunges lawyer Vivian Clarke into yet another murder mystery. Teaming up once again with Bruce Hathaway, an indigenous officer of the RCMP, who has now been promoted from detective to superintendent, they seek not only to solve the crime but also to plumb the connection it might have to a proposed waterfront development that threatens to destroy Pineview’s idyllic way of life. At the same time, they put their energy towards dealing with the increasing challenge of the Pineview youth who have been marginalized by the community. As they share these common objectives, the relationship between them develops more deeply into a bond of love and trust.

Esther Matz, JD, holds a Doctor of Law degree from the University of Manitoba. Now retired, she practiced law in the area of civil litigation and municipal law for thirty-five years. Additionally, her experience as a lawyer in the criminal arena has provided her with insight into the problems faced by prosecutors and defense attorneys. She has lived in rural and urban Manitoba for the greater part of her life and can speak with authority of that part of the world. This is the second installment in the Pineview series. Dr. Matz is married and lives with her husband in Winnipeg. They have two daughters and four grandchildren.

Death of a Tycoon will be available in the FriesenPress Bookstore soon.