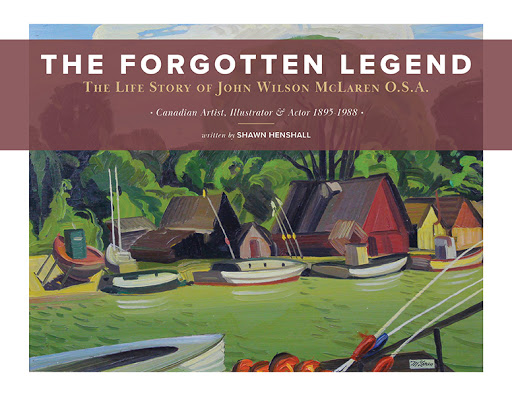 For generations, Canadian artists have made their mark on the world, with countless individuals rising to fame on stage and screen, and as frontrunners in the various arts, inspiring and influencing all who come after them.

One of these legends has been largely forgotten, though his contribution to the arts have inspired the likes of Monty Python and Kids in the Hall, and brought hope and laughter to troops serving their countries at home and overseas, all the while pushing boundaries as a prolific artist, illustrator, author, and actor.

This book tells the story of forgotten legend John Wilson (Jack) McLaren from his birth in Scotland to his early years in Canada, becoming a soldier in WWI, entertaining his comrades in arms on the stages of Europe, his business career after the war, his deep involvement with the Group of Seven, his membership in Toronto’s famed Arts & Letters Club, and his eventual retirement to the community of Benmiller, near Goderich, Ontario, where he passed away in 1988.

His is a story that deserves to be told … and remembered.

Though author Shawn Henshall has a Bachelor of Arts degree and a Master of Science, he has been deeply fascinated by early mid-twentieth century art since he was a teenager, and spends a significant amount of his personal time researching artists and deciphering their role in contributing to the foundation of the modern arts movement in Canada.

The great-grandson-in-law of Jack McLaren, Shawn spent almost twelve years researching his legacy, supported by his family, the Arts & Letters Club, The National Gallery of Canada, the Art Gallery of Ontario, and the Huron County Historical Society and Museum. He hopes this book will satisfy readers’ curiosity about why Canada is so well-known for humour on the international stage, and the real story behind the twentieth-century Canadian art movement.

Shawn lives in Squamish, British Columbia, with his family: his wife, Kelly (Jack McLaren’s great-granddaughter), his two children, Adeline and Elliot, and Tessa the poodle.