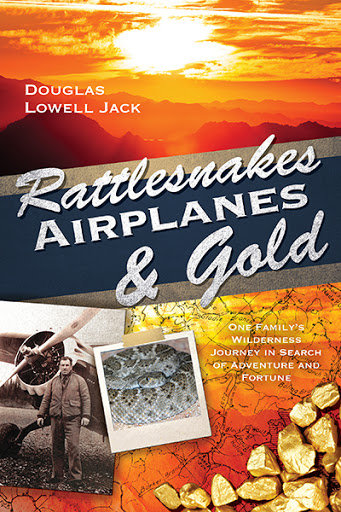 Rattlesnakes, Airplanes and Gold
One family's wilderness journey in search of adventure and fortune
by Douglas Lowell Jack

This book begins with the story of how one American family found their own way into being part of the national pre-occupation with Soviet aggression during the 1950s. They acquired their own bomb-shelter in the form of a 1500-foot long underground tunnel. This tunnel was bored into a mountainside in central Nevada USA for the purpose of mining radio-active Uranium ore. The general idea was that everyone went underground before a nuclear attack. After some time went by, they would then all emerge out into the bright sunshine; start everything back up again; put the coffee on and life would be good...minus the evil Soviet Union!

There were so many deadly rattlesnakes in the area, they even considered sending a few of them in to the authorities along with the Uranium orders, just to liven things up a bit! Maybe just the threat of dropping a whole bomb-load of angry rattlesnakes on the Russians would have been enough! Who knows!

Before this Nevada adventure they had been gold mining in the snow-filled, rugged mountains of Idaho State. This saga also included, at one point, having to be rescued by the US Airforce! Even before all of that occurred, the head of the family had spent 10 years in Alaska as a mining man and a bush pilot. The whole chapter of his Alaskan arctic adventures reads almost like something out of an Errol Flynn movie! The family then moved to the isolated and remote interior of British Columbia, Canada, where a whole new endeavour in placer- gold mining and pioneer living, was begun. Airplanes and bush pilots became a big part of those stories, as well!

This book was written by the oldest son of the family and contains first-hand, exciting, informative and entertaining glimpses into a way of life in North America that is rapidly disappearing. Hopefully, for the older readers, these stories will surely bring back vibrant memories of their own past adventures and for the younger readers, this book will be a call to action to find and live their own dreams.

Through it all, this family definitely had their share of:

Douglas Lowell Jack was born in Seattle, Washington, USA, then grew up in and around mining camps in Idaho and Nevada, before moving to British Columbia, Canada at the age of 10 years. His parents were engaged primarily in the mining business. His father was also an experienced Alaska bush pilot.

Douglas has lived an exciting life, certainly when he was around his parents but also on his own in the years to follow. He became a skilled heavy- duty mechanic, equipment operator and also a professional musician. He is well read on a variety of topics and is able to write about all the many experiences of the Jack family with a lot of natural enthusiasm, humour, knowledge and attention to detail.

He currently resides near Prince George, British Columbia, Canada, with his wife Deanna and is still looking around for the next adventure!