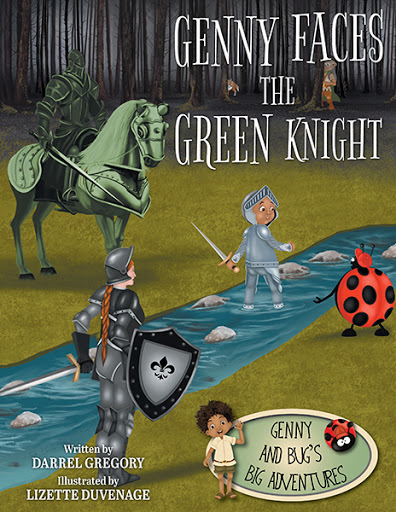 An adventure of courage, resilience, and self-confidence, Genny and Bug’s Big Adventures: Genny Faces the Green Knight features a young African Canadian girl named Genny and her sidekick, Bug, who embark on heroic adventures together. Using her imagination, Genny transports from the magic tunnel in her bedroom to Arthurian times, where she meets Queen Guinevere, who calls for help to stop the Green Knight from frightening her people. Although Genny valiantly steps up to battle the Green Knight, she is unsure of her ability to succeed.

Along her journey, Genny learns that she will have to tap into her own resilience as well as accept help from those around her in order to face her most daring challenge. From the tips of her toes to the hairs on her head, Genny begins to "feel" her confidence grow. Children will rejoice in and be inspired by Genny’s bravery, personal growth, and appreciation for the world around her in the first book of this must-read series.

"...curiosity and mystery build until the suspense kicks in, and then a mighty battle takes place, ending with a just-right finale that will have readers inspired to go on their own bedroom adventures."

"In Darrel Gregory’s middle grade fantasy, Genny Faces the Green Knight, a girl with a great imagination has an exciting, make-believe adventure in medieval times.

Fast, tidy, and pleasing, Genny’s narration is direct and repeats challenging words to help with retention. Also more than once, she shares her fun and inspiring method for handling new and unnerving situations: she tells herself, “Feet, get moving!” Inspiring themes, including of adventure, imagination, friendship, and courage, make her tale deeper and more memorable."

Darrel Gregory is the author of I’m Not Very Good at It, his first children’s book. Darrel was inspired to write the first book in the Genny and Bug series by the great mythology scholar Joseph Campbell and his work on the hero’s journey. As a child, he wished that he had someone who inspired him to be awestruck by nature and his surroundings. Through Genny and Bug, he hopes to encourage children to explore their own sense of purpose and the world around them.

Darrel lives in Edmonton, Alberta, with his two granddaughters nearby, and is currently working on the next book in the Genny and Bug series.