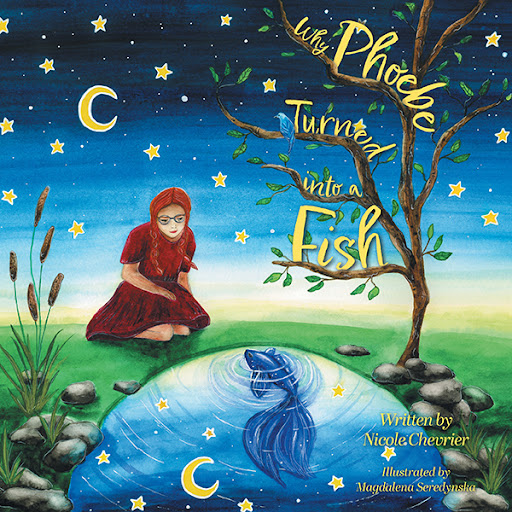 Why Phoebe Turned into a Fish
by Nicole Chevrier

Phoebe is a bright, imaginative, and sensitive young girl . . . and also a little bit shy. When her family decides to move across Canada, Phoebe worries about making new friends, and starting over at a new school. But she knows she can count on her best friend (and best fish) Tango. After the big move, Tango starts acting a little strangely. He isn’t even swimming around his favourite pirate ship! Phoebe thinks he may be sick and doesn’t want to leave him while she attends school.

But that isn’t the only reason why she wants to stay home.

Phoebe hasn’t told her parents that there are two bullies at school who make her life miserable. She bottles up all of her emotions, and runs away from her problems by escaping to the natural world, where she feels better. Along the way, Phoebe discovers a special place, where she meets talking animals and dancing plants. Where are Phoebe’s adventures taking her? Is it just her active imagination, a fantasy, or has Phoebe discovered a secret world?

Phoebe’s journey deals with change, loss, and grief, but at its core is Phoebe’s transformation from a vulnerable little girl to a brave and resilient one.

First-time author Nicole Chevrier has been spellbound by the written word from a young age. As a child, she was entranced by the classics such as Alice in Wonderland, The Wind in the Willows, and the tales of Narnia. At the tender age of ten years old, Nicole wrote her first novel and was experimenting with poetry. She evolved her love of books into a degree in Philosophy, and she has been published in the Huffington Post.

Why Phoebe Turned into a Fish draws heavily on her personal experience. Nicole continues to be passionate about the issue of bullying and hopes that her story will inspire others to speak up and get help.

Nicole Chevrier lives in Ottawa, Ontario, with her family and three cats. You can find more of her writing at nicolechevrier.ca.