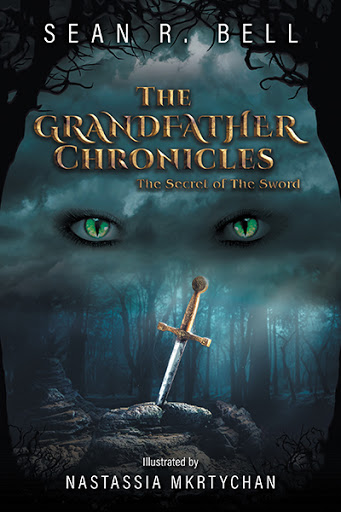 The Secret of The Sword
by Sean R. Bell

An ancient bloodline. A powerful enemy. A hidden sword with the power to save or destroy the Earth.

Ian Dekker is a twenty-five-year-old filmmaker and hockey fanatic living a happy life in Toronto, but little does he know his destiny is about to change forever. The arrival of a mysterious letter from his deceased grandfather draws him back to his home city of Montreal, to his grandfather’s old house, where he follows clues that lead him to an astonishing truth. Ian is a descendant of the Pendragons: the family who, in the Middle Ages, established a vast empire in Western Europe, giving rising to legendary figures such as the High King Uther, whose mentor was none other than the great wizard Merlin. However, as Ian learns, King Uther had a jealous sibling named Morgana, who, after living in her brother’s shadow, turned to darkness in order to gain power and exact her revenge. Merlin and Uther managed to trap Morgana inside the sword Excalibur—but now, centuries later, she is on the brink of escaping her magical prison with the help of loyal followers.

This is where Ian comes in. Just like his grandfather before him, Ian must harness his magic and inner strength in order to keep evil at bay. Armed with only his grandfather’s journal, myth comes to life, and Ian is swept into an adventure that takes him across the world and between realms—from light into shadow—as he accepts his destiny. By his side is his childhood friend, Kate, as well as his mother, Lynn, who both help him navigate the mysterious waters of his family history. Ian’s courage and strength are tested as he searches for answers, meeting cruel enemies along the way who use trickery and possession in order to pursue Ian in his quest. In this story, good and evil have the same destination, and only the legacy of a grandson—fuelled by his grandfather’s love and trust—can save the world from complete destruction.

"Engaging... [The Secret of the Sword] is fundamentally imaginative—successfully marrying Arthurian legend with modern-day Canada."

"A fresh, exciting spin on Arthurian Legend, with a genre-mash up combining a mystery-thriller with fantasy, that's a winner."

"The Grandfather Chronicles - The Secret of the Sword is as evocative as it is riveting. Through gripping battles, stunning worldbuilding, and tapping into raw human emotion, Sean has opened the doors transporting us to an exhilarating new world."

Sean Bell is a Canadian author. Growing up, his creativity and interests were encouraged by the loving relationship he shared with his grandfather. An avid reader, he has long been fascinated by epic narratives, fantasy literature, Arthurian legends, and powerful villains. Combined, these influences led to the writing of his first book, The Secret of the Sword, which is part of his forthcoming series, The Grandfather Chronicles. His imagination and dedication to nurturing family values has helped Sean in creating a world filled with magic that readers of all ages will relate to. He currently resides in St. Catharines, Ontario, with his dog Rocky.