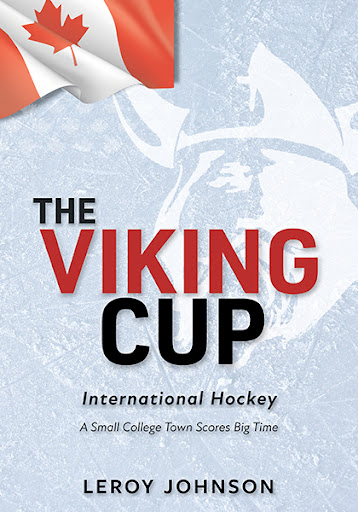 How does a small college in a rural Alberta city of just over 12,000 people become host to the finest hockey players in the world? Now a part of the University of Alberta, Camrose Lutheran College was challenged to compete against larger city colleges. Through persistence in following a vision, the school and the community embraced the potential of the Viking Cup in 1980, opening their doors to the world of hockey through this unique international exchange program. Outside, the Cold War was raging but barriers seemed to melt as the love of hockey played on. By the time the Cup had its last hurrah in 2006, the NHL had drafted more than 400 players from its ranks.

The Viking Cup, memoirs and stories of the program’s founder, is a joyful account of an important chapter of Canada’s hockey history.

international junior hockey tournament over Christmas 40 years ago into a roaring, must-see,

"I recommend this book as an important chapter in Canadian International hockey history. It was a huge deal for young men to experience this high caliber of International play at the Viking Cup. The European teams were jammed full of the upcoming stars of the world.

"I like to look at the footwork in the future of hockey. That is why I went to the Viking Cup"

“The atmosphere at the Viking Cup was incredible. It was so lively and so much fun.

As players we knew the full house of fans were enjoying it like we were. It made a big

"The Viking Cup was my introduction to North America."

LeRoy Johnson was the founder of the Viking Cup Exchange program while he was the director of athletics and international relations at Camrose Lutheran College. He led the Viking Cup as coordinator for twenty years. LeRoy and his Viking Cup team of volunteers turned unconventional practices into the norm, and his dedication to education, sport and politics earned him a University of Alberta Alumni recognition award in 2009 and an induction into the Alberta Hockey Hall of Fame and the Alberta Colleges Athletic Conference Hall of Fame in 2014. Through the success of the Viking Cup and his college career, LeRoy set his sights on politics and went on to be a city councillor and for 11 years was the MLA for Wetaskiwin-Camrose constituency. LeRoy lives in Camrose and often reconnects with personalities involved in the Viking Cup.