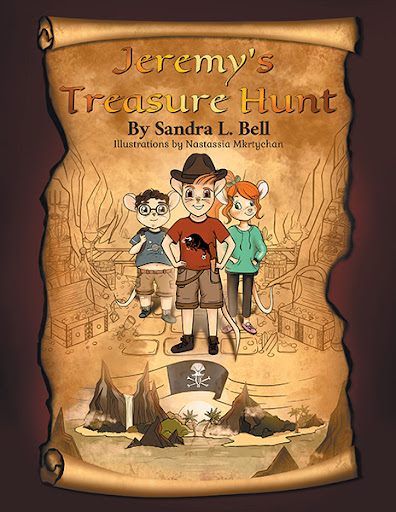 Jeremy’s Treasure Hunt invites readers into a magical mice world, where ten-year-old mouse Jeremy Jones attends Shady Tree Elementary. Winning the local, school soccer championship has been a dream come true for Jeremy! So when his school announces its soccer team—despite months of hard work and training—is unable to participate in the regional championships because of a lack of funds, Jeremy decides to raise the money they need. He is determined to do all he can to play that championship game.

When roving pirates complicate his fundraising efforts, young Jeremy and two brave teammates—Fiona O’Malley and Mortimer Gustafson—must embark on a thrilling and sometimes terrifying adventure in search of pirates’ gold. Along the way, they’ll encounter poisonous snakes, rumbling mountains, collapsing trails, and deadly mirror-mazes. And even if they can triumph through these trials, they’ll have to battle Blackbeard, the most notorious pirate of all time.

Jeremy might have taken on more than he bargained for. Will his team get to the Regionals—and will he, Fiona, and Mort even survive to play in the game?

Sandra used to love to throw adventurous birthday parties for her sons when they were little. One of the best was a dinosaur treasure hunt that thrilled all the party guests. The kids loved the adventure and Sandra loved seeing the excited expressions on their faces. This led the author to write a sixteen-page manuscript that ended up pushed into the back of a drawer. When her grown-up son found it years later, he encouraged her to develop it into a children’s book.

Sandra lives in St. Catharines, Ontario, with her husband and two sons. A recent addition is their son's Maltese puppy, Rocky, with whom the whole family has fallen in love.