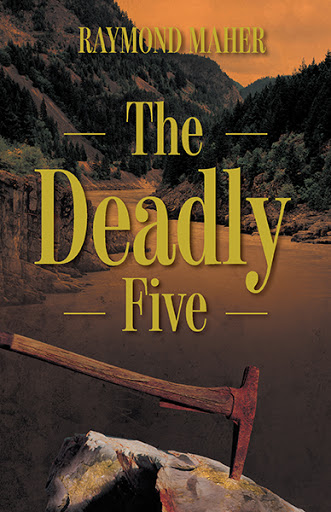 The Deadly Five
by Raymond Maher

It is 1858 and thousands of gold seekers are descending on the west coast of British Columbia to seek their fortunes in the gold rush. The new British colony becomes a hive of activity where Americans, Canadians, and the indigenous people of the land collide, often with deadly repercussions. An unlikely team of adventurers forge an alliance as they make their way along the treacherous Fraser River, hoping to strike it rich. With dangers at every turn from man, nature, and beast, the men learn to rely on one another to survive. Though they all seek enough gold to change their lots in life, friendship and camaraderie may be the greatest treasure to be found on their journey.

The Deadly Five is based on the enthralling and fascinating Fraser River Gold Rush. Brimming with adventure and intrigue, readers will be whisked back to the early 1800s where life was merciless, and it took courage and determination to find that elusive pot of gold.

“Raymond Maher is a masterful storyteller who takes fans of historical fiction on a wild ride through the early years of the Fraser River Gold Rush in British Columbia, Canada—banding together an unlikely group of fortune hunters. His colorful characters are both deeply flawed and delightfully amusing at times. Readers will easily find a character they can relate to as they journey along with them into the 19th-century wilderness."

Raymond Maher is a lifelong storyteller who was inspired to write The Deadly Five after reading about the Cariboo Gold Rush. Raymond is a regular contributor to several newspapers in Saskatchewan. Though he loves to curl, garden, and create art, his true passion is writing and making people laugh. A retired schoolteacher and ordained minister of religion, Raymond has four children and seven grandchildren. He lives in downtown Chilliwack, British Columbia near the historic Five Corners with his wife of fifty-three years and two cats.