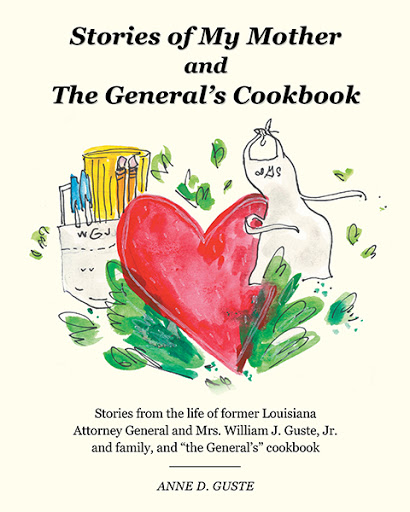 Stories of My Mother and the General's Cookbook
Stories from the life of former Louisiana Attorney General and Mrs. William J. Guste, Jr. and family, and "the General's" cookbook
by Anne D. Guste

While assisting in the care of an aging and yet very active parent, the author recounts many of the stories that were often told to her by her mother of some of the most memorable and vivid scenes in her long life of more than ninety years. As the mother of ten children and as the wife of a former State Senator and five term Attorney General from the State of Louisiana, Mrs. William J. (Dorothy) Guste, Jr. would indeed have some wonderful and amazing stories to share. These stories demonstrate the character of Billy and Butsie Guste, as they were more commonly and affectionately known, in often standing up for and defending many of the social justice causes of their day and in laying the groundwork for many of the civic, community and charitable endeavors that would proceed forward into the future with great success - all while raising a family of ten children. Also included is a cookbook of recipes written and compiled by “the General” and shared with his children, all as a wonderful memory of their collective love of cooking over the years as a shared favorite family pastime.

Born and raised in New Orleans, Louisiana, Anne Duchesne Guste attended the Academy of the Sacred Heart during her elementary and high school years and then went on to earn a Bachelor of Arts degree at Georgetown University in Washington, D.C. Thereafter, she attended Loyola University School of Law in New Orleans. Growing up as the youngest child in a large family, Anne learned from hands-on experience and observation the joy and satisfaction of cooking while also observing her parents’ hard work and dedication to community and public service. With a general, private practice as an attorney, Anne lives and works in New Orleans.

Dorothy Johnson Garbe is an artist and illustrator living in Austin, Texas with her husband Chris and their two sons. She is the founder of Good Work Studio and grateful to have been a part of a project that captures generations of flavorful family memories. Her maternal grandparents are William and Dorothy Guste.