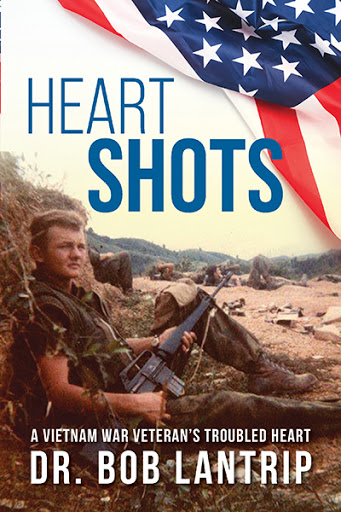 When Damon Lee Lane joins the US Marine Corps with two of his friends, he’s not quite sure what the future holds. Thrust into the middle of the Vietnam War, he must use his wits and courage so that he and his fellow Marines survive. But there is more going on than he knows during the battles and near misses he experiences.

Heart Shots provides insight into what’s happening inside Damon’s heart, where all things are processed. Even as he struggles, Damon learns that there is a Higher Power at work who guides, preserves, and helps us in times of trouble.

As the war grows more volatile, Damon’s experiences become increasingly traumatic. Who will live? Who will die? And will Damon Lee Lane become just another name on the wall?

Dr. Bob Lantrip experienced everything that Damon Lee Lane went through. He developed PTSD and was later treated for it by Veterans Affairs. After returning from overseas service, he was able to hold down a job for the first ten years. Then he went to college, where he earned a Doctor of Chiropractic degree in Chiropractic Upper Cervical Non-Force Adjusting, which he practiced for 30 years before retiring.

He is the Chaplain for the local Marine Corps League, Yakima/Kittitas Detachment 1055. Dr. Lantrip is also an Outpost Leader for Pointman International Ministries of Yakima, which helps veterans by getting them into the local VA for assistance and weekly discussion groups to help them overcome personal problems.

Dr. Lantrip lives in Yakima, WA, with his wife of 51 years and their two dogs, Missy and Carolina. They have three children, nine living grandchildren, and one grandchild (their first) who died at birth from the Agent Orange Exposure that both of his grandpas were exposed to in Vietnam. Dr. Lantrip’s home overlooks the Yakima Valley and he thanks God every day that he made it home.