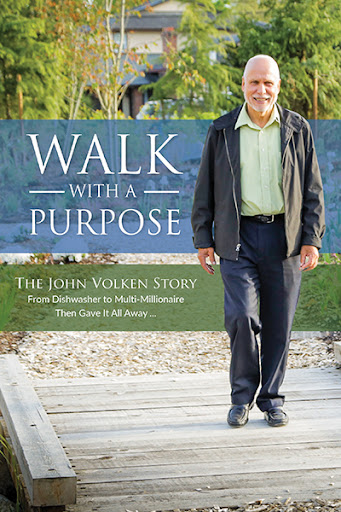 Walk With A Purpose
The John Volken Story From Dishwasher to Multi-Millionaire, Then Gave It All Away...
by John Volken

Horatio Alger wrote in the nineteenth century about impoverished boys rising from humble backgrounds to lives of achievement through hard work, determination, courage, and honesty. Alger should have met John Volken. He would have loved him, as many of us do.

John’s story begins as a child in an orphanage in the Soviet Union occupied East Germany, it continues as a young man washing dishes for 25¢ an hour in Canada, and culminates with him amassing a fortune as a businessman…

That is where the venerable American writer might have ended this story and where most men would have settled into a life of golf. But that’s exactly where the best and most exciting part of John Volken’s story begins… It’s all here, and then some!

John Volken was born in Germany during WWII. He lost his father in the war and spent part of his youth in an orphanage in East Germany. This may well have been the seed of his current endeavors. At 18, John immigrated to Canada with no money, but with plenty of enthusiasm. He started his climb from rags to riches as a dishwasher, farm laborer, and construction worker. As he became comfortable with the English language he turned to sales and business and finally found his niche…in 1981, he opened a small second-hand furniture store. He built this enterprise into one of the largest furniture retail chains in North America, with over 150 locations and more than $200 million in annual sales. For his accomplishments, John received many awards, including “Entrepreneur of the Year” for Canada’s Pacific Region.

Having achieved financial success, John often reflected on his days in the orphanage and his desire to one day help those in need. He counseled with various disenfranchised communities. They consistently stressed the need for long-term, residential treatment facilities that incorporated teaching life and job skills. During the next eight years, John visited and studied numerous addiction treatment facilities worldwide.

In 2004, John sold his furniture business and put the proceeds in a foundation which today supports the John Volken Academy and other charities.