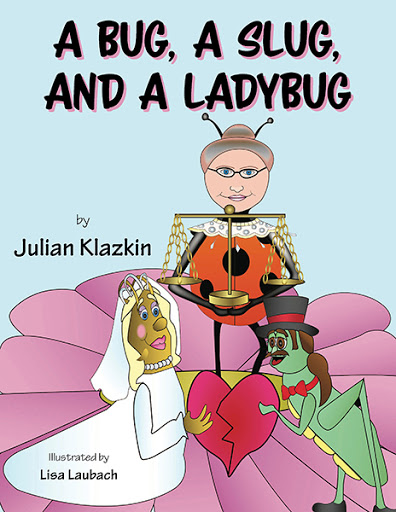 A Bug, A Slug, and a Ladybug
by Julian Klazkin

A bug is a bug, and a slug is a slug. And everyone knows . . . bugs and slugs DO NOT mix! But when Barney the bug and Sally the slug fall in love, bugs everywhere begin to question what they were so sure of before. The entire bug kingdom watches as these two brave lovebugs take the matter to the supreme bug court to plead their case for bugs and slugs to be together, despite their differences. The judges are divided, but one smart ladybug, Ruth Bader Ladybug, sees to the heart of the matter. Follow along as Barney and Sally fight the law for love.

A Bug, A Slug, and A Ladybug introduces children to the judicial system and how to fight for their beliefs. Following the story of Barney the bug and Sally the slug, young readers learn of marriage equality, diverse family units, and the heroic legal ladybug modeled after Supreme Court Justice Ruth Bader Ginsburg.

"A clever take on teaching young readers about the justice system." — Kirkus Reviews

Julian Klazkin practiced law in the federal government for more than thirty years, specializing in health care legal matters. Julian also taught community college, worked as a disc jockey (DJ), and currently volunteers as a docent for a museum in Washington, DC. No matter the environment, every day Julian witnessed the importance of teaching children about standing up for their beliefs and values, as well as how to use the court system, when necessary, to fully realize justice and equality for all. These experiences inspired Julian to write educational children’s books, including A Bug, A Slug, and A Ladybug and many other such stories.

Julian has two adult children and lives in Bethesda, Maryland with his wife. A Bug, A Slug, and A Ladybug is Julian’s first publication, introducing children to the legal powerhouse that is Ruth Bader Ginsburg . . . or Ruth Bader Ladybug, in this case. Stay tuned for more of Julian’s work and more of Ruth Bader Ladybug! Julian may be contacted at bugandaslug@gmail.com

Lisa Laubach has been fulfilling her dream of illustrating books for several years. Specializing in children’s picture books, her credits include Kayla and Kyle Plant Corn, Wally and His Adventures with Cleo, Nom Nom Nom, and Our Family Picture. She has also illustrated some larger works, such as the memoir A Boomer’s Life. Lisa lives in Bangor, Pennsylvania with her husband and two children. Lisa may be contacted at creativeillustrations2@gmail.com

A Bug, A Slug, and a Ladybug has been nominated by our staff as one of their favorite books.