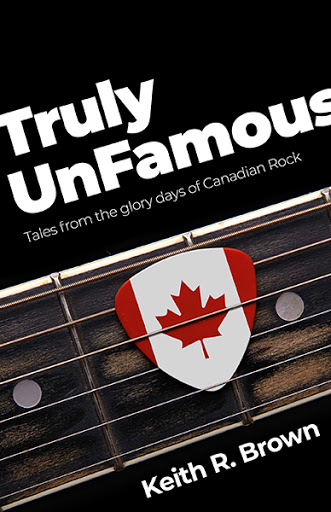 AFTER GETTING A JOB AS A BARTENDER at a small Montreal Rock bar, Keith soon found himself working a Doors’ concert at the Montreal Forum. His job was to carry a very inebriated but stoic Jim Morrison back and forth between the stage and dressing room. A few years later, Keith become a tour manager for Montreal’s Donald K Donald productions and helped develop Canada’s first cross-country rock circuit.

Truly UnFamous is a collection of tales from the beginning of the Canadian arena rock era to its apex. Having spent months at a time driving across the country with popular Canadian bands like Rush, The Stampeders, and April Wine as well as some of the top musical artists in the world, there are certainly stories to tell. These are the ones which are fit for print.

Celebrity memoirs often leave the impression their authors had a difficult time, as if they missed the party. By contrast, Truly UnFamous wasn’t written by a celebrity. Keith, a.k.a. “Reckless Eddy”, worked behind the scenes and has no excuses, no regrets, and as Bob Dylan put it, "no secrets to conceal". As a result, Truly UnFamous gives us an upbeat look at the early days of arena rock in Canada, beginning in the fabled summer of 1969.

For the past fifty years, Keith Brown has worked in the music business. From stagehand, to tour manager, and ultimately to the president of Aquarius Records and the Head of Business Affairs for The DKD Group of Labels, Keith has helped sell millions of albums by Canadian artists as diverse as April Wine, Metric, Sum 41, Corey Hart, Half Moon Run, The Stampeders, Kevin Parent, Helix, Michel Pagliaro, Sass Jordan, La Chicane, Danko Jones, France D’Amour and Serial Joe.

Keith lives in Montreal and continues to work with Canadian artists who self-release their recordings.

This is his first book