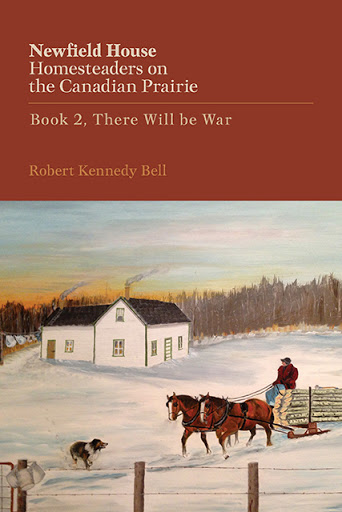 There Will Be War
by Robert Kennedy Bell

It is summer, 1884. Most folks in the fledgling community of Blaris in western Manitoba have had two to three years to establish their subsistence farms. All have the long-term view that when there are railroads to carry their grains and livestock to market, they will have the cash flow to survive. At the moment, they are growing pork, beef, chickens, and grain for flour, mostly for their own tables. Meanwhile, tensions are mounting further to the west in the valleys of the Saskatchewan. Many in Blaris have some appreciation and sympathy for the western causes, such as the plights of the Métis, many of whom left the Red River Valley in Manitoba following the conflicts of the 1870s. The Métis are again being hounded by the government in Ottawa, which has begun surveying the river lots that they had already established, mostly along the banks of the South Saskatchewan River near Batoche. The Métis want recognition for the provisional government they established in the absence of any interest from the East. In short, they want some control over the laws and structures of the land on which they live.

The Prairie Indians, who had signed Treaty 6 with the Queen in 1876 at Fort Carlton and are reluctant to occupy the confining Indian reserves that they had been allocated, are suffering from severe malnutrition. Without the prairie bison on which they had depended for generations, they now face starvation. In addition, they—especially their children and elders—are being decimated by diseases such as scarlet fever, smallpox, and measles. There is no sign of the medicine chest that they had been promised in the treaties. Back in western Manitoba, the settlers’ nightmare is that the Indians and the Métis will find common ground and unite their formidable warrior skills to drive the settlers from their lands. Accounts of the bloody Sioux uprising in Minnesota only twenty-two years earlier fan these fears.

Robert Kennedy Bell grew up on Newfield Farm: the subject of this book. He began his education at Blaris School, a one-room schoolhouse a mile from their home. With the closing of that school, he continued his education at Isabella and Miniota. He received a BSc and a Certificate in Education from Brandon College and an MSc in limnology from the University of Manitoba.

After enjoying 10 years as a principal of junior and senior high schools in Glenella, Manitoba and Aklavik and Hay River, Northwest Territories, he spent another 15 years in wildlife administration for the Government of the Northwest Territories. This latter period coincided with the negotiation of aboriginal land claims across the Northwest Territories, all of which had the shared primary objective of carving out a meaningful role for beneficiaries in the administration of wildlife and fisheries. He is the author of several technical papers and chapters in books dealing with the shared management of wildlife in Canada.

In 1986, Robert joined his oldest brother, Jack, to form a consulting firm, Norplan Consulting, in La Ronge, Saskatchewan. The firm specialized in renewable resource administration and environmental impact assessments. Now semiretired, he lives in Blaine Lake, Saskatchewan, about 25 miles west of Fort Carlton (near where the first major battle of the 1885 insurrection took place). This is the second volume of his Newfield House series.