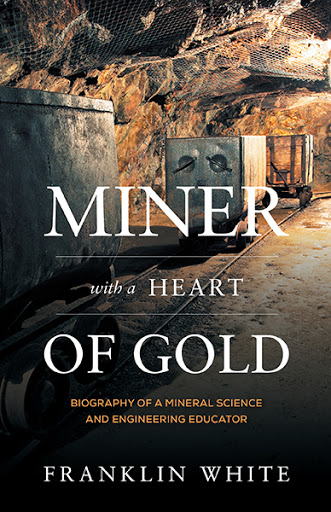 During the mid-twentieth century, Mineral Science and Engineering educator Frank White played an influential role in the advancement of his field, widely respected not only for his knowledge but also for his advocacy, leadership, and visionary perspective on both mining technologies and their impact on the environment. He looked at mining and metallurgical engineering though a much wider lens than was common at the time, embracing a diversity of cultures with environmental consciousness, inclusiveness, and a commitment to sustainability.

Written by his son, this is the story of Frank White—a story that connects people, cultures, and histories from around the world: Australia, New Zealand, the Western Pacific, South East Asia, and North America. He lived through hardship, warfare, and economic upheavals, but with the love of his family, and the satisfaction of scientific and educational advancement, he remained always a seeker of knowledge, and an inspiration for all those whose lives he touched.

"Miner with a Heart of Gold is the story of a man probably born out of his time. Frank White was passionate not only about mining, but the sustainability and impact of mining on the environment, which were not considered mainstream issues in his time. I am sure that if he had been alive today, he would have a mission to educate young people on the crucial role of mining to society. He would be aware that mining is one of the world’s greatest consumers of energy and emitters of carbon dioxide, and that, in supplying the raw materials to construct renewables, how this is done is critical in the fight against climate change.

This is a book on a remarkable life, which would be of interest to anyone, but should be considered essential reading for young people thinking of entering the world’s minerals industry.

Franklin White is an Australian-born Canadian who has lived and worked in numerous countries with a focus on international and global development. Based on this work and related research, he is an acknowledged author in the health sciences. In Miner with a Heart of Gold, he diverges from this stream to address the life of his late father, a mineral science and engineering educator. As Frank White's son, he grew up talking geology, geography, minerals and metals “over the dinner table”. Before entering medicine, he worked summers in the mining industry, and has followed its evolution over decades including its current challenges with social and environmental sustainability. Relevant to these challenges, a significant amount of his medical and public health career has addressed environmental and occupational health issues. For his professional work, he is the recipient of a Breakthrough Award for Creativity from the Academy for Educational Development, and a Medal of Honor from the Pan American Health Organization, the World Health Organization regional office for the Americas. He lives in Victoria BC where his interests include offshore sailing and flamenco-jazz guitar.