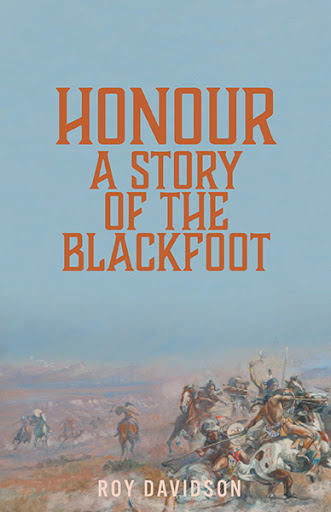 Honour
A Story of the Blackfoot
by Roy Davidson

Honour was more important than life itself. For a Blackfoot boy to gain honour, he needed to be successful in warfare. The raiding parties and horse stealing were their way of life.

Unable to participate in such pursuits, Sun Shines on Him feels more and more isolated. The things through which he is expected to find satisfaction are no match for the honour and glory given others, returning from war. Determined to make a name for himself, Sun Shines on Him steals away in the dead of night.

Born Blackfoot but raised among the whites in the East, at a young age tragedy propels Looker back to his people. More tragedy on a Missouri steamboat means he will spend the next three years among the Crow, bitter enemies of the Blackfoot. Immature and naïve, he finally returns to his own people. He is an adolescent when he is hurled into the warfare culture of his people. Influenced by his years among the whites and the Crow, he must find a way to fit in.

Sun Shines on Him and Looker find themselves on the leading edge of history as the arrival of the white man threatens everything they’ve ever known.

Roy Davidson became a Blackfoot historian after finding and mapping an ancient trail that was used by the Blackfoot and their neighbours for 10,000 years. Moved by the historical significance of his discovery, he has studied and researched Blackfoot and Native history, writing and presenting on that subject in Southern Alberta where he lives. Feeling like he had grown up and lived much of his life with a complete misunderstanding of Native culture, he wishes, through fiction, to give his readers a perspective and a truth that was never taught him in school or in life. He has trekked the beautiful prairie and rugged Rocky Mountain ranges where this story unfolds, and with great sensitivity and respect for the traditional Blackfoot culture, and an intimate knowledge of the early Canadian west, he has crafted a story that will captivate, entertain, and inform.