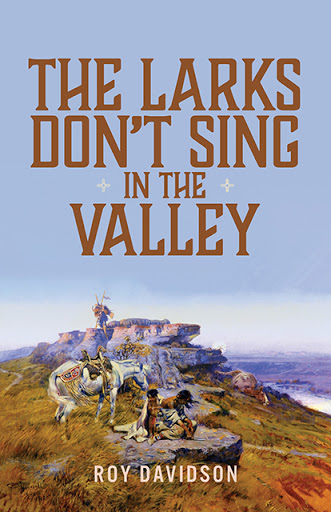 The Larks Don't Sing in the Valley
by Roy Davidson

Two teen boys, each from a different culture; both abandoned by their own people in the middle of the Canadian wilderness in 1834. Andy is searching for his father, a white missionary, who is somewhere in the vast and untamed Canadian west. Badger, a Blackfoot Indian, has lost his father to the constant warring that goes on between the Blackfoot and the other Indian tribes that surround their territory. Follow along, as they find one another under precarious circumstances and become friends, surviving against both hostile Indians and hostile whites. Danger and lightheartedness, treachery and romance accompany their adventures as they come of age in the pristine land of wild buffalo and wild men, while Andy never gives up hope in finding his father.

Roy Davidson is a lawyer and an outdoorsman who has become a Blackfoot historian after finding and mapping an ancient trail that was used by the Blackfoot and their neighbours for 10,000 years. Moved by the historical significance of his discovery, he has researched Blackfoot and Native history, writing and presenting on that subject in Southern Alberta, where he lives. Feeling like he had grown up and lived much of his life with a complete misunderstanding of Native culture, he wishes, through fiction, to give his readers a perspective and a truth that was never taught him in school or life. He has traipsed the beautiful prairie and Rocky Mountain ranges where this story unfolds, and with great sensitivity and respect for the traditional Blackfoot culture, and an intimate knowledge of the early Canadian west, he has crafted a story that will captivate, entertain, and inform.