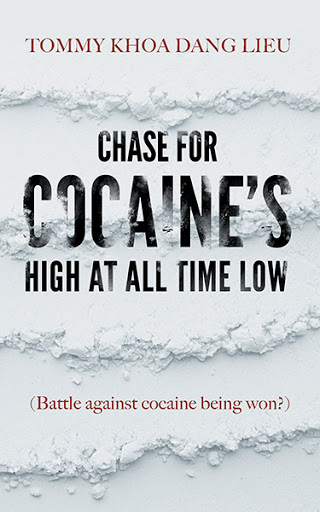 Chase for Cocaine’s High at All Time Low
(Battle against cocaine being won?)
by Tommy Khoa Dang Lieu

Law enforcement around the world have put a strangle-hold on the cocaine industry. As a result, drastic changes in the potency and physical properties of the cocaine available in the eastern Canadian market have occurred over the past 25+ years. Not only have there been changes to the drug itself, but these changes have also resulted in transformation of the behaviour of users and the areas of Toronto (and other major world cities) affected by cocaine trafficking and use.

The bottom line? The cocaine available today is measurably less potent and of a far lesser quality than that available in the past. And this deterioration is only going to continue, as global trends suggest that it will be next to impossible to produce cocaine of the same potency as 25 years ago, particularly due to the success and progress of law enforcement across the globe.

Tommy Khoa Dang Lieu chronicles his experiences in the cocaine and drug trade, weaving a compelling argument that combines lived experience with hard data to paint a picture of the decline of the once-lucrative cocaine industry.

Only thing ever constant in life is change! Fact is nothing or no one is immune or impervious to transformations of any kind. Hence a thesis on the changes to and in the Cocaine Trade and War have come to light. Twenty five plus years of persistent and integral law enforcement globally has affect cocaine greatly. Annual United Nations World Drug Reports and medical evidence have corroborated and supported the thesis put forth with little room for argument!! Ultimately though, standard business principles and common sense should prevail to an open mind.

Tommy Khoa Dang Lieu has been in the cocaine industry for 25+ years. He was a cocaine user when the drug was so powerful that no one who consumed it was able to function as a normal human being.

He has been at the top of the underworld drug trade, orchestrated a prison escape, and has survived circumstances that would have felled lesser men. A straight-talker who doesn’t glorify drug makers, traffickers, or addicts, Tommy tells it like it is.

A single dad for the past 9 years, he lives in Toronto with his 11-year-old son.