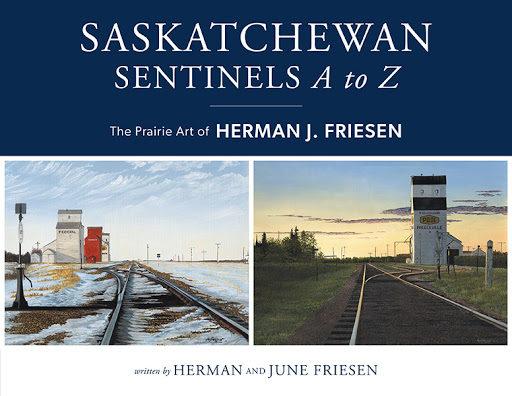 Saskatchewan Sentinels A to Z
The Prairie Art of Herman J. Friesen
by Herman Friesen and June Friesen

The images in this book have been organized in alphabetical order. As you journey through the alphabet, each image depicts a Saskatchewan town with the stately elevators that were so essential to the settlement and growth of the province. You will also gain an insight into the variety of scenery as it changes with the seasons.

In an effort to preserve the memory of those wooden grain elevators, Herman has spent many years photographing and then painting the images of what he refers to as "Saskatchewan Sentinels". In publishing this book he hopes the images will bring back fond memories for those who once worked at or used these elevators for their grain deliveries and will perhaps spark an interest in a generation that is more familiar with the inland grain terminals used today. The images in this book depict scenes of Saskatchewan as it was during the 1980's to early 2000's.

Herman Friesen is a well-known artist specializing in prairie landscapes and wildlife captured with oil on canvas. His special interest is the grain elevators that stood as sentinels overlooking the Saskatchewan towns. As these sentinels began to disappear from the prairie landscape, his goal became to preserve their memory. Herman spent many years travelling around the province while taking photos of the remaining elevators. These are the photos that were used as references when painting the images found in this book.

Herman has retired to the town of Springside, Saskatchewan, with his wife June and continues to enjoy painting and gardening as well as spending time with their 3 children, 6 grandchildren and their recently added great grandson. He especially looks forward to summers when travel is easier and is planning a future book featuring churches which though no longer used, are still an important part of our history.