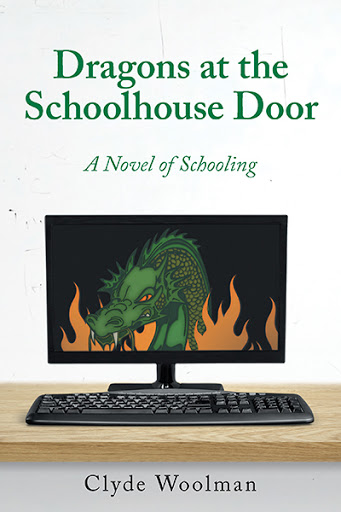 Dragons at the Schoolhouse Door
by Clyde Woolman

Dealing with incompetent bureaucrats, a power-hungry parent, and a scheming superintendent aren’t the only hurdles facing second-year principal Steve Hepting. Fortunately, he has steadfast allies, including the academically-challenged school custodian, a feisty eco-activist teacher, and a counselor urging calm amidst the swirling brouhaha.

A mysterious blueprint for a “Brave New World” of public education not only threatens Hepting’s school but the education system itself. The principal enlists the aid of a scandal-sniffing journalist as he and his colleagues grapple to uncover the truth.

The comedic tale unfolds as the presence of an “Animal Hotel” on the deserted second floor unexpectedly complicates the implementation of the master plan and Hepting’s role in the entire affair.

“The characters are brilliant composites that anyone in education can recognize and relate to. The use of irony and satire make them enjoyable, memorable, and engaging.”

“I really identified with the colorful characters and the humor poked at the system. This was an enjoyable walk along the road of school administration.”

"With Woolman's tongue planted firmly in his cheek, he presents the constant conflict between what seems to make sense and what is actually done, especially when working with bureaucracies..."

"Enjoyable! A candid look at public education from a writer who has been there. Engaging characters move the story which has humor and intrigue . . .”

Author Clyde Woolman has been a principal of an elementary, a middle, and three high schools. He completed a six-year hiatus as a Superintendent (CEO) of a school district before reengaged neurons led him to voluntarily announce a return to a school. At one time or another he has been involved in public education from Kindergarten to the university level.