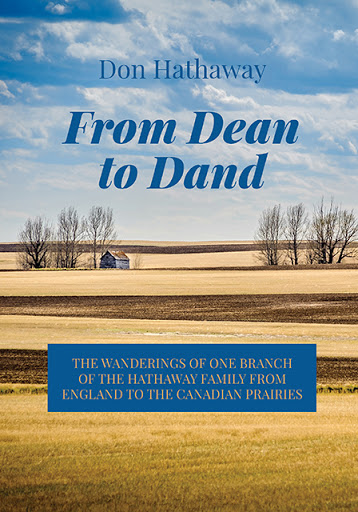 From Dean to Dand follows the Hathaway patronymic from its inception in the Forest of Dean in Wales, when it was recorded in the Domesday Book. The family spread across England before crossing the Atlantic to the American colonies. One branch of the diaspora, the author’s ancestors, migrated north into Upper Canada and then west onto the Canadian prairies. The story traces that branch of the Hathaway family as one small thread in a tapestry woven from shifting political, social, and economic forces. Perhaps the real story in these pages is the tapestry and its story of the courage to face social, political and economic change, the energy and resourcefulness of those whose stories launched all of ours.

Originally trained as a technician Don Hathaway became an engineer, a successful business executive and an entrepreneur. Akin to other polymaths he is an historian, an occasional mathematician, a painter, an amateur chef, a bibliophile, a writer and lecturer, a genealogist and an avid gardener. He has travelled extensively, living for extended periods in the west of England and in France. Along the way, he has cultivated an interest in writing, first for professional reasons then for his own pleasure. History is an abiding interest, as is the pleasures of imparting his family story to others.

Hathaway, who was born in the southwest corner of Manitoba and spent his teen years there, today lives in Stratford, Ontario, with his wife, Mary-Ann and four cats, surrounded by a large and gregarious family. From Dean to Dand is the first of a two-volume pair. The first is intended for curious historians with a taste for genealogy while the second is an intimate account of life on the Canadian prairies in the middle of the twentieth century.