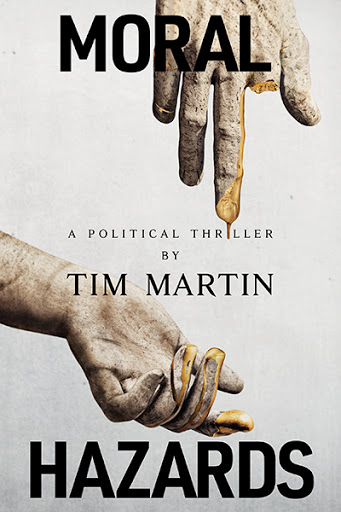 IN WAR RIGHT CAN GO WRONG AND SOMETIMES WRONG IS THE ONLY RIGHT THING LEFT TO DO.

Anik is a rookie human rights lawyer with a mission to make rape as a weapon of war recognized as a crime against humanity. After she is humiliated by the loss of a high-profile case against a Nazi war criminal who had been hiding out in Canada, she looks for redemption in the world’s largest refugee camp, Dadaab. Against the backdrop of a devastating African civil war, women refugees provide evidence to Anik that atrocities are happening where a UN peacekeeping operation has been deployed. Together with Omar, a renegade politician, Anik embarks on a quest for justice that takes her into deadly conflict with an ambitious UN general and a vicious warlord.

Moral Hazards is a political thriller with a social conscience that reveals the human face and high stakes below the surface of military intervention. Author and veteran diplomat Tim Martin brings the authentic voice of experience from international conflict zones to this unflinching and heartfelt exploration of a peacekeeping operation gone bad. Tim’s high-level diplomatic service includes leading Canada’s civilian work in southern Afghanistan, the Kimberley Process to ban conflict diamonds and Middle East Peace negotiations. Tim has been awarded three medals for his service to Canada and the Award of Excellence in the Public Service for Canada’s humanitarian assistance to Palestinian children affected by conflict.