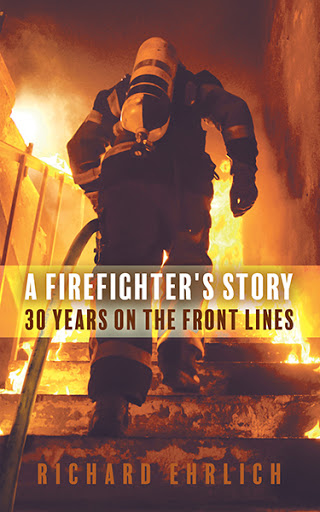 A Firefighter’s Story is a powerful memoir of a man’s thirty-year career in a couple of exceptional and selfless professions.

Richard A. Ehrlich spent three decades as a professional Firefighter and paramedic with the Philadelphia Fire Department, including twenty-one years as a lieutenant. In this gripping memoir, he shares intimate tales of the reality of this life, which is filled with danger and tragedy but also, sometimes, miracles. Rick describes catastrophic fires, including one at a major oil refinery where eight firefighters died and another at a high rise office building where three more lost their lives, and he shares the story of the radical group Move and the bomb the city dropped on their row-home compound that killed eleven people, including five children. He also pays tribute to 9/11 and the courageous New York City Fire Department.

A Firefighter’s Story is an homage to a remarkable profession and the men and women who take it on, told through the story of one of their own.

“​​In this memoir, a man recalls his three decades as a Philadelphia firefighter and pays heartfelt tribute to his brethren in “the most dangerous occupation in the United States today.”

“Firefighters are held in the highest esteem by most Americans. We should be.” By the end of this book, readers will be inclined to agree with Ehrlich’s assessment.

​This work is the next best thing to sharing a beer with the author and asking him to relate dramatic stories of “heroic rescues, breath-taking acts of bravery, heart-rending tragedies and horrific deaths.”

​An engrossing account of what makes firefighters so essential."

Richard A. Ehrlich spent three decades in the service of the citizens of the city of Philadelphia. In his role as a firefighter for the municipal fire department, including twenty-one years as a lieutenant, and five years as a paramedic for the city’s EMS services, he experienced so much. Along the way, he’s taken various career-enhancing courses and written a fire prevention manual that illustrates to officials from other cities our continuous effort and commitment to educate the public in safety issues and fire prevention awareness.

Mr. Ehrlich lives in Lancaster, Pennsylvania, with his wife, Ellen, and their great kitty, Ivy.