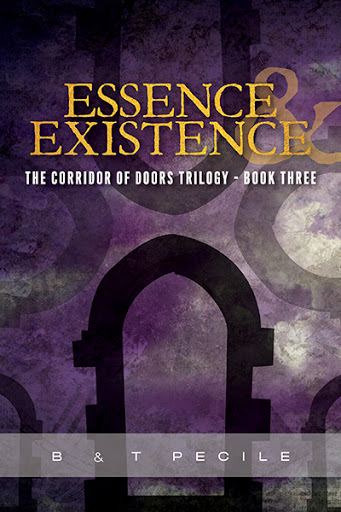 Khia, Norbert and McBride, The horde, Between and Betwixt, Corridor of doors, Sevens & Sixes, Asmodeous

Essence & Existence
by B Pecile and T Pecile

FOR ALMOST LONGER THAN SHE CAN REMEMBER, Khia Aleyne Ashworth has been chasing a destiny thrust upon her by forces beyond her control. Now, reunited with her little brother, whom she thought was lost forever, Khia finally reaches what she hoped would be a safe haven at the end of their long journey: Lady Tiamore’s kingdom. However, even though she is at last together again with her old friends and what is left of her real family, she feels more lost and alone than ever.

The Corridor of Doors still isn’t done with her. Instead of an ending, she finds that her trials have only just begun. With new and troubling answers about who she is, where she came from, and what lies ahead, Khia must traverse unfamiliar and dangerous paths that could lead to life or death, good or evil, creation or annihilation. What she discovers comes at a great cost.

With the Corridor itself threatened with destruction, and countless worlds crumbling to ash, Khia and her companions must fight to ensure their survival, and that out of the ashes, something better is reborn.

“The deep lore that backs Essence & Existence makes it a vibrant urban fantasy.”

Review for Between & Betwixt, Book One of The Corridor of Doors Trilogy:

"5 STARS - Between & Betwixt is recommended to anyone who loves sophisticated young adult fantasy and is looking to jump into an exciting new series. Never pandering to younger readers, this fast-paced and exciting YA fantasy features rich characters and a compelling plot." 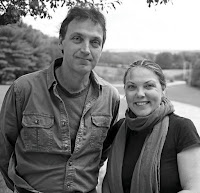 Bruno and Tina Pecile, a brother and sister writing team, have accomplished something that most siblings never manage: they worked on a project together and brought it to completion without killing each other (or anyone else) in the process.

Instead, their joint imagination and drive has brought to life this astounding trilogy, which entertains readers even as it inspires questions regarding the nature of life, family, and the universe.

While Bruno lives in a log cabin in Northumberland County, Ontario, and Tina lives by New Brunswick’s Northumberland Strait, they have always managed to successfully span the distance that separates them—almost as though they had access to a portal of some sort.

Essence & Existence is the final installment in The Corridor of Doors Trilogy, following Between & Betwixt (2015) and Sevens & Sixes (2016). See also La Clé de L’Entre-Mondes (2018), the French translation of Between & Betwixt.