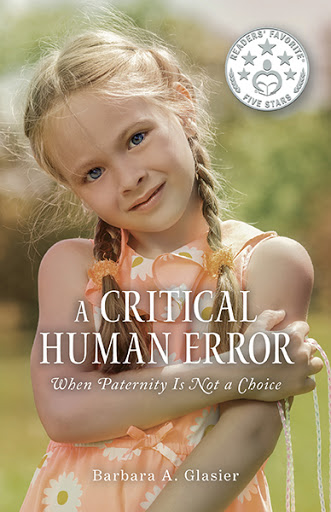 A Critical Human Error
When Paternity Is Not a Choice by Barbara A. Glasier

Sixty-one-year-old Meredith Taylor answers her door one day to find a worried-looking little girl, who announces, “I’ve come to stay with you for a while…I’m your granddaughter.” From this unexpected and jaw-dropping event, Meredith and her husband Andy are thrown into an emotional storm. But the turmoil that this little stranger’s appearance causes for them pales by comparison to what their unsuspecting son, Aaron, endures. What happens next is a series of revelations and shocking discoveries about Sam's conception and her mother's manipulation, not just of Aaron but of his whole family. Somehow though, in the midst of the rising pressure and the dizzying complications, six-year-old Sam manages to win Meredith and Andy’s hearts, even as they watch their own beloved son falling apart emotionally. Part-mystery thriller, part-affecting romance, and part-testament to the power of family love. A Critical Human Error is a book for grownups, who will relate to these complex people and the white-hot emotional conflicts they face.

"Barbara Glasier brings us a compassionate and affecting story about lives upended and the power of family to heal deep wounds."

—Fran Kimmel, author of ‘The Shore Girl’ and ‘No Good Asking”

"Barbara Glasier has written a wonderful family drama based on a situation that is rarely heard of or discussed, taking the reader on an emotional roller coaster from start to finish."

—Michael Parlee, author of ‘We Must Forgive To Live’ and The Sacred Gem Within’ 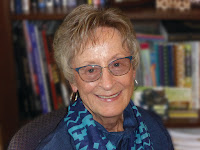 Barbara Glasier has a degree in nursing and has worked in many avenues including hospital and emergency room nursing, public health, community care, and administration. During her career she has encountered multitudes of family crisis situations and has been brought into contact with the fallout from many of today’s societal issues. Though she has done a great deal of professional writing as a nurse-educator, A Critical Human Error is her first novel. Barbara is a mother and a grandmother. She and her husband live in Lacombe, Alberta.

A Critical Human Error will be available in the FriesenPress Bookstore soon.