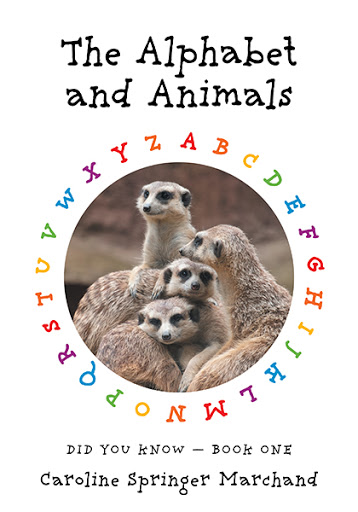 The Alphabet and Animals
by Caroline Springer Marchand

A is for Alligator!

Did you know that a group of Alligators is called a Congregation?

Learn the alphabet like never before with this clever and educational children’s book all about groups of animals. Did You Know? The Alphabet and Animals: Book 1 teaches readers about Eagles, Lizards, Tigers, and more.

A Party of Peacocks sure sounds like fun! What other groups of animals can this alphabet book teach us? Caroline Springer Marchand is a retired Dawson College professor of over 33 years. A former Teacher of the Year, Caroline headed her department several times, represented her union as President, and became President of the Retired Teachers at the College. She is now a certified ceramist who loves to read, sew, crochet, draw, and learn new recipes.

Caroline lives in Montreal with her husband, Gaston, along with her daughter, her daughter’s wife, and three grandchildren. The grandchildren’s pet lizard, named KnightKnightSuperman,can be found around the home, too, and maybe soon a small dog!