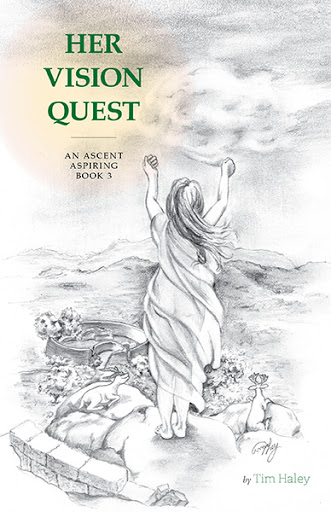 Her Vision Quest
An Ascent Aspiring
by Tim Haley

This is a story of adventure, friendship, and self-discovery that unfolds in the great wilderness of northern Vancouver Island and the mysterious ruins of an ancient city in Zimbabwe.

An Ascent Aspiring follows the younger, lovably intrepid Shirley, as she searches for a lost burial cave in the remote mountains of Vancouver Island. Older, as an archeological illustrator, her work then takes her across the ocean to the grassy savannas of Zimbabwe where she aims to solve an architectural riddle. What secrets will Shirley discover at the ruins of Great Zimbabwe?

Immersed in the rich cultures of Shirley’s two adoptive families, First Nations and Shona, An Ascent Aspiring is a must-read for fans of cross-cultural mythology and archeology. At times exhilarating, at others deeply touching, Shirley’s life journey is infused with magic and the warmth of human connection. An Ascent Aspiring satisfyingly completes the Her Vision Quest trilogy.

Tim Haley is a goldsmith, sculptor, painter, printmaker, and musician. He grew up in the Rocky Mountains of Colorado, where he learned to love the outdoors and worked on small cattle ranches. After studying art at the School of the Museum of Fine Arts in Boston, Massachusetts, he moved his family to Black Creek on Vancouver Island, where they homesteaded and built a home in the bush. He currently lives in Courtenay, British Columbia with his family.

An Ascent Aspiring is the final installment in the Her Vision Quest trilogy, following A Memory Calling (2014) and A Descent Unravelling (2017).