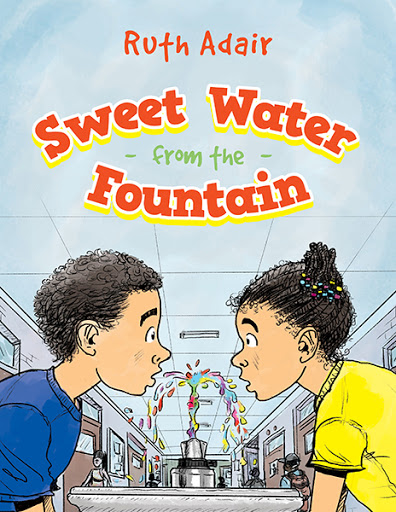 Sweet Water from the Fountain
by Ruth Adair

A new school. Another move.

And then there’s a delicious secret ...

Micah and his twin sister, Aria, are surprised when they see the lineup for the water fountain at their new school. Neither of them likes drinking water unless they have no choice.

But when Aria gets really thirsty and finally drinks from the fountain, she discovers she’s not drinking water. Instead, it tastes like raspberry lemonade. Micah doesn’t believe her until he tries it for himself.

One day the twins arrive to find the building flooded and their school closed. Will the school be reopened? And, more importantly, will the fountain still have its delicious flavors?

Ruth Adair was born on the beautiful island of Jamaica and immigrated to England with her parents at a very young age. On an adventurous quest, she moved from England to New Brunswick, Canada, where she worked as a nanny for a year before moving to Toronto, Ontario.

While visiting family in Jamaica, she met an American serviceman on the beach. Three years later, they were married and living in the USA. Before Ruth’s daughter was born, she decided she wanted to be a stay-at-home mom. She ran a daycare business out of her home for four years, then started working for the Military Child Development Center when her daughter was three.

Ruth has lived and worked with military children in Spain, Hawaii, and Virginia, first as a teacher, and finishing her career as a training and curriculum specialist. She has a BS in sociology and an associate degree in early childhood education. Ruth loves to travel. She now lives in Virginia Beach, VA, with her husband, James and daughter, Alannah.