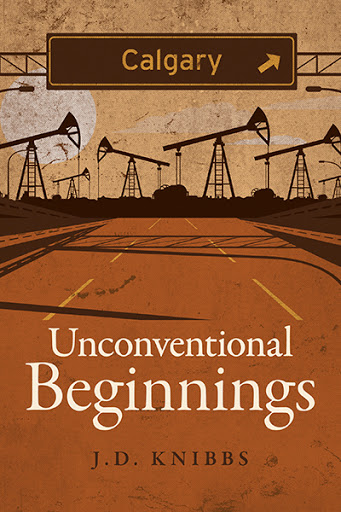 Unconventional Beginnings recounts the story of a young engineer’s introduction to the cutthroat oil and gas business in the Canadian prairies. While Garth Gibbins longs to be a farmer and maintain his family’s agrarian traditions, he discovers a real talent in his new career as a reservoir engineer at the Maldere Energy company in Calgary. As the main engineer for an area of shallow gas in Southeast Alberta, Garth has everything going for him: he has a great job; he has lots of friends; and he has a smart new girlfriend. When Garth’s father suffers a heart attack, Garth takes a leave of absence from work, which provides the opportunity for a rival engineer to step into much of Garth’s role. Tyler accelerates the pace of development and drilling in the area previously under Garth’s careful supervision. Upon Garth’s return to work, he struggles with management to slow the pace of drilling, fearing that this pace will lead to disaster. A man’s needless death on the drilling rig further propels Garth to dig into the company’s ambitions and motives. As corporate greed and conspiracy within Maldere compete against the young engineer’s principled stance, the intrigue builds and spreads into Garth’s personal life as well. Who can Garth trust? Are colleagues manipulating him? Is anything what it seems? These questions and others echo throughout this exploration of modern corporate ethics and personal development.

J.D. Knibbs grew up in small town Saskatchewan. In his twenties, he moved to Calgary, where he has worked in petroleum engineering for over twenty years. Unconventional Beginnings loosely resembles his own experiences in the oil patch and is his first novel.

Mr. Knibbs lives with his wife and two boys in Okotoks, a town in the Province of Alberta, Canada, approximately eighteen kilometers south of the City of Calgary.