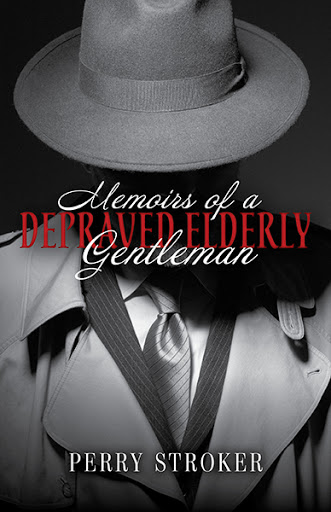 Memoirs of a Depraved Elderly Gentleman
by Perry Stroker

Memoirs of a Depraved Elderly Gentleman is the autobiographical story of Perry Stroker, a world-renowned and ethically questionable neurosurgeon (now retired) and writer, that delves deep into his personal exploits with a variety of diverse and fascinating women. Sharing deeply private experiences and thoughts in such a public forum might be daunting to most, but Perry is rarely daunted, as made evident by the stories he shares from his colourfully expansive intimate life. Full of humour, witty repartee, and titillating erotica, Perry’s stories are woven with a skill and mastery only surpassed by his apparent expertise in the boudoir, wherein he proves that one doesn’t have to be young and ostentatiously virile to please an appropriate and enthusiastically consenting audience.

Perry Stroker was born of a Russian father and English mother. He rapidly matured into a brilliant and imaginative pupil and his early promise was confirmed by many awards and a few short prison sentences. The latter were, fortunately, expunged from his record by a general amnesty.

On leaving school, he had to choose between writing and a career in medicine. He decided on the latter, specializing in neu- rosurgery. This work led to several significant advances in the field and to world-wide recognition, with the extraordinary honour of having a commemorative stamp issued by the USSR celebrating his work, which is reproduced on the cover of this book.

His medical career was cut short by an ambitious but ultimately unsucessful attempt to transplant a rat-brain into the skull of a well-known politician. Biochemical analysis suggests the skull was in fact rejected by the transplanted tissue. It is believed that the techniques he developed are still being pursued clandestinely by right-wing groups in various countries.

His love of travelling has taken him both to Africa and South America and inspired his return to his first love of writing. His extraordinary first book, “Camel Desire”, opened up the literary style now widely recognized as “ungulate erotica”. This received effusive praise from literati across the world. Pravda described it as

“Shorter than War and Peace, and much funnier than the Brothers Karamazov”.

It was followed by the remarkable sequels: “One Hump or Two” and “Camel Knowledge” to complete the trilogy. The film rights have recently been sold, and we look forward to the release of “Bactrian to the Future” next year.

More recently, a trip to Peru has inspired “The Llamasutra” and a return to England led to “Dromedaryot”, which was his sequel to “Camelot”. We are more than proud to present the “Memoirs of a Depraved Elderly Gentleman”, which represents his first venture into autobiography.

He currently lives in Ottawa, along with an alpaca.