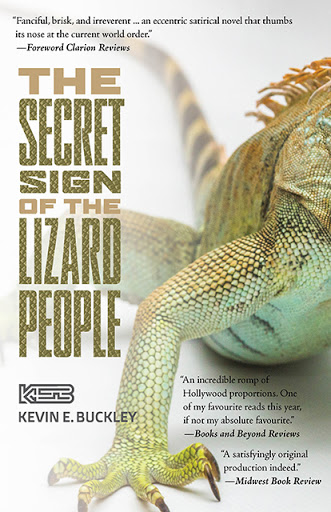 The Secret Sign of the Lizard People
by Kevin E. Buckley

When partners in crime-reduction Jerry “Leafy” Green and Bill “Beefy” Goodness — two of the LAPD’s most skilled homicide detectives — investigate the bizarre killing of a fashion model at the Hollywood Sign it soon becomes clear that this murder is part of a much larger conspiracy that threatens not only the people of America, but the entire population of the planet. As the case progresses, they recruit the help of a Jesus-lookalike ufologist, a streetwise Goth graffiti artist, a world-renowned geneticist, a super-nerd cyber investigator, and a fire-and-brimstone inner city reverend. The detectives and their motley crew of improvised freedom fighters must work quickly to take down the tainted global elite and avert the merciless enslavement of humanity that looms large on the horizon.

“An incredible romp of Hollywood proportions. One of my favourite reads this year, if not my absolute favourite.”

—Books and Beyond Reviews

“Fanciful, brisk, and irreverent ... an eccentric satirical novel that thumbs its nose at the current world order.”

“Blends satire, intrigue, and an investigative story with elements of scifi, making for a genre-crossing read that will especially delight those who enjoy mystery, comedy, and literary approaches to detective procedurals. The perfect choice for an engrossing story that holds no predictable resolution, but harbours the ability to attract and maintain reader interest up to its unexpected conclusion.”

“Kevin Buckley’s [inaugural] novel combines elements from Men in Black, The X-Files and myriad TV cop shows as two wisecracking detectives try to solve a murder involving a Hollywood landmark, gangsters, celebrities and a Burning-Man-like festival in the desert ... readers should agree that it’s a promising start.”

“It’s mysterious, it’s well written without the endgame being obvious ... I’d love to see more of Leafy and Beefy in the future.

Born in the United Kingdom but happily dwelling “across the pond”, Kevin E. Buckley has travelled far and wide seeking new experiences and delving into interesting cultures. His travels ultimately led him to the pristine wilderness of the Great White North, the perfect setting for him to freely express his creativity. When not putting pencil to paper, Kevin is a business owner and musician and has played lead guitar with various rock and blues acts in both the Old World and the New. Choreographically challenged from an early age, he has fought hard to overcome a seriously debilitating dancing disability. On the plus side, he is now widely recognized as a fully-fledged, genetically certified non reptoid. The Secret Sign of the Lizard People is Kevin’s first published work.

The Secret Sign of the Lizard People has been nominated by our staff as one of their favorite books.