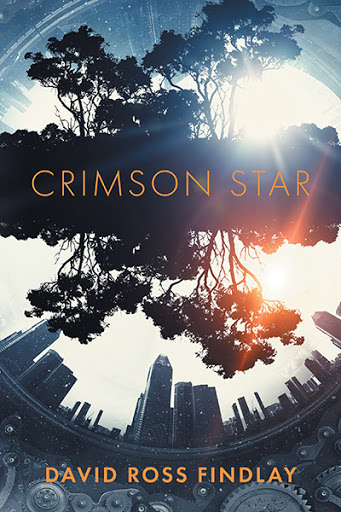 A world ship with an advanced AI system.

When Jones and Hendricks escape death in the Jovian system, they have little idea they’re going to be quite literally lost in space. Their escape pod enters an unusual area of space, and they encounter a world ship, the Crimson Star—which has been missing for over two generations. Launched from the Neptune Dry dock in 2498 CE, it disappeared from all sensors 30 years after leaving the solar system.

Inside this marvel of technology, the McKendree cylinder, a civilization has risen that mimics that of the ancient Romans, but with a twist: future humans with laser rifles and high-tech gear fight alongside Roman centurions. These people live inside a rotating cylinder where they see the landscape rise overhead, and seas and mountains fade into the clouds.

But life inside the Crimson Star is anything but tranquil. As Jones and Henricks are faced with one mystery after another, they discover they’re caught amid an ongoing war between Olympias and Magnus Jupiter. And the world ship’s AI system has a hand in it all…

David Findlay is a lifelong fan of SF/F and a history buff who was educated at Centennial College and York University. He has been writing, which he calls a great cure for an overactive imagination, for most of his adult life. Besides writing, he enjoys recording original music and painting.

As a child, he saw Neil Armstrong step onto the moon “live,” along with all the other kids in his public school. This made a big impression on his then six-year-old self, and he has always wondered what the human race could achieve. David particularly loves tales about artificial worlds and wanted to create one of his own, resulting in Crimson Star.

David lives in the Beaches of Toronto, Ontario, with his wife Lisa and their dog, an 11-year-old beagle named Rex. Watch for his next novel, Blue Star, the second in The Terraroma Trilogy.