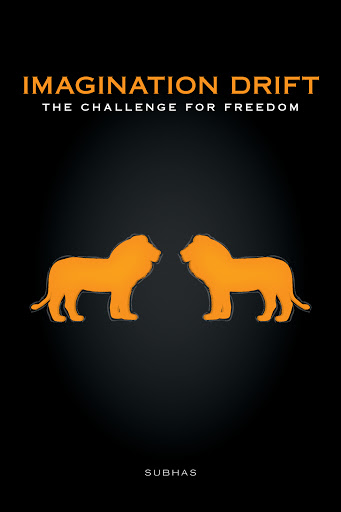 The Challenge for Freedom
by Subhas

IMAGINATION DRIFT: THE CHALLENGE FOR FREEDOM is the second part of a trilogy. The satiric story continues with Zalador, in his quest to secure a place on the Supreme Council, must fulfil the requirements of a wish. The acceptance as a member of the Council means that the lion is given cosmic freedom; a release from the limits of his stay as an entity on the dry and dusty plains of his former Kingdom.

In the first part of the trilogy, IMAGINATION DRIFT: A PRINCE FOR THREE DAYS Zalador’s attempt ends in the death of his wish-partner, Malcolm; but through an appeal he is given a second chance to complete the requirements to enter the Supreme Council.

While Zalador has to select a new wish partner; he is given the additional task of assisting a young lion, the Major, in finding a wish-partner to achieve the requirements of the wish. The Major, a lion from the Urban Display Arena (the zoo), is arrogant and constantly reminds Zalador of his contacts on the Supreme Council; that he is sure to be selected; that he is chosen one. To Zalador dismay he has no contacts on the Supreme Council.

The difficulty is that there are two lions competing for a single position on Council and the benefits from the galactic freedom. Both are aspiring to achieve a release from the earth-bound gravity and this creates the challenge. Zalador is suspicious of the Major’s intentions but is in the compromised position of assisting his competitor. This results in each picking on the weakness of the other to demoralize the competitor out of contention. The journey takes Zalador and the Major with the wish Partners, Princess and Sta, in and out of Paradise and the visit to a new Homeland.

Subhas completed his under-graduate studies in South Africa. He was best known for the production of Black on White, a satire on the socio-political climate of the apartheid system. He entered Canada in 1969, without a visa, and was given a 30-day visitor’s permit.

He was advised to go west, and at the Toronto train station from a destination selection of Winnipeg, Regina and Calgary he chose the middle-one. With time running-out and no support he went to the Immigration Department in Regina. At the conclusion of an interview the Officer in Charge shook Subhas’ hand and said; “We need to keep you here!” …. and he began his career as a Speech-Language Pathologist in Saskatchewan completing his Master’s Degree in the USA.

Subhas is internationally known for his work in designing and developing the Pictogram Symbols Program. He has created many educational and community based items using the symbols.

Subhas has written three novels, two in the IMAGINATION DRIFT Series and one titled ON A DUSTY ROAD: The Life and Death of a Young Man. He has had an interesting life journey in South Africa and Canada and will be documenting it in A LIFE OF CHANCES.