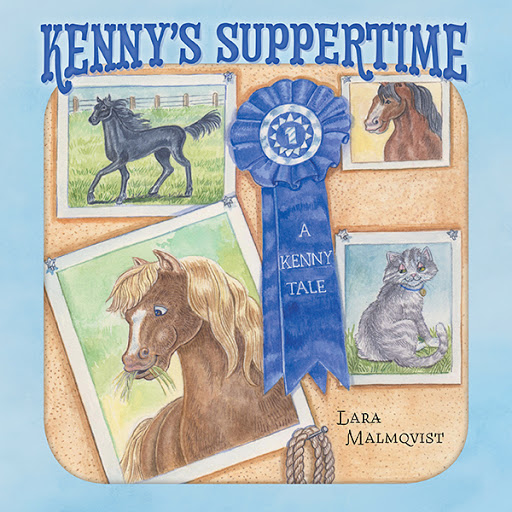 Kenny is a small pony with a big appetite, who feels like he never gets enough hay at suppertime. His neighbour is a big horse named Joe, who gets much more hay at suppertime, but is picky and doesn’t eat it all. Thomas, the barn cat, teaches Kenny how to slip into Joe’s paddock, and Kenny soon makes this a daily habit, to eat the rest of Joe’s hay after he finishes his own!

Kenny gets chubbier and chubbier, while Joe fails to gain any weight, and Jessica, the groom at the stable, can’t figure out why, until one day when Kenny is caught in Joe’s paddock with his muzzle buried deep in the mountain of sweet, green hay!

Kenny's Suppertime is the first book in the Kenny Tale series.

An avid rider since childhood, Lara has had the pleasure of knowing and working with many horses and ponies. But none of these beautiful animals have proven as challenging, nor become as important to her family, as a little roan pony named Kenny.

Kenny's Suppertime is the first book in her Kenny Tale series.

Today, Lara works as an engineer and lives in the rolling foothills of southern Alberta with her two kids, three dogs, six cats, at last count, two horses, and a mischievous pony named Kenny. You can visit her online at www.LaraMalmqvist.com