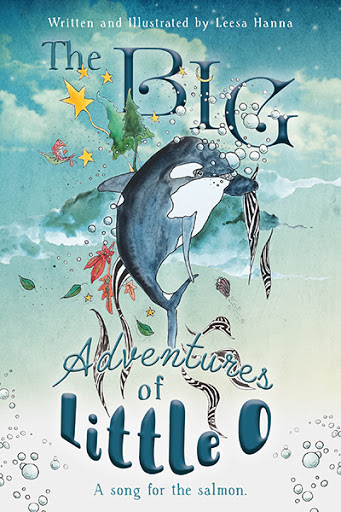 In the ocean off the Pacific West Coast, a hungry orca pod is chasing the last remaining salmon. When Little O becomes separated from Mama Whale and gets lost, he must begin a journey of survival that will take all his strength and courage. On his quest to find the salmon and reunite with his family, Little O becomes connected to Mother Nature through her magical messages and the creatures he meets along the way, including Dalli the porpoise, Lutris the Otter, and Griz the grizzly bear. He also meets Ruby, a human girl, and her dog, and when he comes face to face with a menacing orca called The Pirate, he must flee or be brave and fight for his life. With nature all around him, Little O is never alone as he learns to follow his heart and trust his instincts to find his true destiny.

"Does a leaf get lost on a tree? Does a cloud get lost in the sky? You know the way, Little O. Listen to your heart."

Leesa Hanna is a mother, writer and artist who has always felt a strong kinship to nature. She creates art and poetry inspired by the natural beauty of her home on an inlet off Indian Arm in Port Moody, British Columbia. She is married to fellow writer and creative inspiration Warren Hanna, and they have a thirteen-year-old daughter named Ruby who adores soccer and loves to write and create. They live with their two cats, Winnie and The Kitten and a feisty red betta fish named Jimmy.