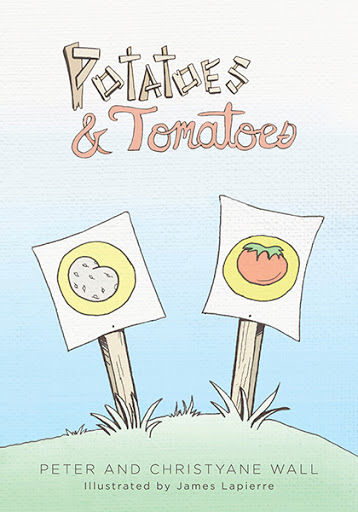 Potatoes and Tomatoes
by Peter Wall and Christyane Wall

What will happen when the two farmers stop growing so many extra tomatoes and potatoes?

In years gone past, Peter Wall wrote a series of editorial letters to his local newspaper. He told Christyane about Peter and Paul numerous times after they first debuted in newsprint. His family has always actively digested current events and engaged in debate. As a result, the economy has been a popular topic around the dinner table over the years. He believes that globalization has limits and that people should try to shop local and support local businesses. Peter lives in rural Eastern Ontario with his wife Clare, and their cat, LouLou.

Christyane Wall grew up in Quebec during the era of the language wars, where political discussion was a pervasive part of everyday life. She vividly recalls hearing her father’s stories of Peter and Paul, and wanted to immortalize them through children’s fiction so that others can enjoy her father’s words as much as she did. Christyane lives six minutes away from her parents in rural eastern Ontario with her husband, Cory, and her two dogs, Huxley and Mia.