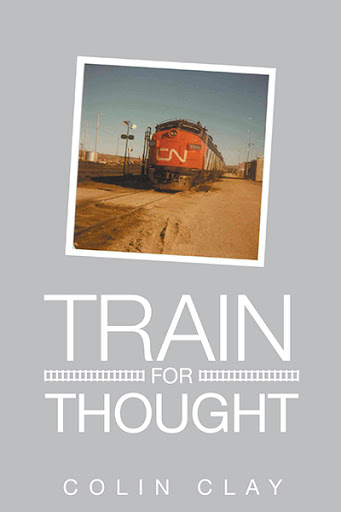 Train for Thought
by Colin Clay

This is the fourth volume in Colin Clay's autobiographical series which tells of the seven years the Clay family enjoyed living in the town of Capreol, a railway community just a short distance from Sudbury, Ontario. Colin had served pastorally and academically in Sudbury when the family arrived from England, but when there came a vacancy at St Alban's parish in Capreol the Archbishop of Algoma appointed Colin as its rector with Colin continuing at Laurentian University but soon adding a position as the Civilian Officiating Clergyman at the Canadian Forces Station at Falconbridge. Capreol provided many opportunties for Colin, Barbara and their four children and Colin was happy with his varied responsibilities. The Clay family continued to enjoy exciting holiday travels across North America along with renewed visits with families in the United Kingdom. Colin was active with Army Cadets as was Barbara with Girl Guides. When the family left for Saskatoon in 1977 Philip and Gill had begun studies at university and college and Alan and Susan were ready for high school. The next volume entitled "It's A Dry Cold" will continue with the Clay's adventures on the Canadian prairies.

British by birth, Colin Clay has been a proud Canadian for sixty years. After coming to Canada in 1959, he served pastorally and academically in Sudbury, Ontario, and then came to Saskatoon in 1977 to be one of the ecumenical chaplains at the University of Saskatchewan, retiring in 2000. His dear wife Pat died in 2007. Colin continues in the ministry and is committed to inter-faith dialogue. Although he encountered health difficulties in the summer of 2018 and moved to a retirement home he continues to serve as the padre in various veterans clubs and remains a strong advocate for world peace. He is the author of six books, a father, grandfather and great-grandfather.