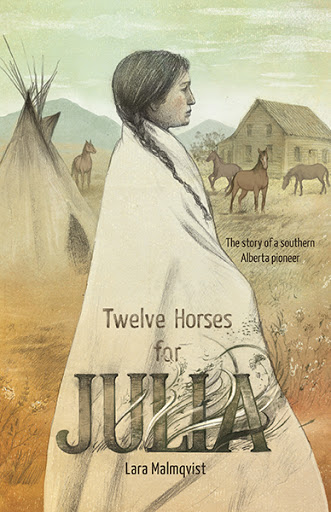 Nineteenth-century living wasn’t easy, as settlers struggled to tame the land and make a living from it for their growing families, with little or no help from a government stretched far too thin. For young Julia and her family, forced off their land by circumstances beyond their control and heading west along the Oregon trail, the hardships they had grown almost accustomed to were about to become nearly unimaginable.

Ambushed by Blackfoot Indians, Julia and her siblings are captured by warriors and brought back to their encampment, and adopted as members of the tribe against their will―the fate of their real parents uncertain and terrifying to contemplate.

Years pass, and Julia faces countless challenges and relentless change, all with a determination and strength forged from hardship under the prairie sky. As she grows to adulthood, she realizes that she has to somehow make her way in a world of which she has never truly been a part, being neither truly white nor truly Indian.

It is a journey that will take her from freedom to captivity, from joy to despair, and come around full circle more than once before she can even hope to find her true home and put down roots that might span future generations.

As a descendant of an early pioneering family, in what would become the province of Alberta, Lara Malmqvist grew up hearing the colourful tales of the early southern Alberta settlers, living in an untamed landscape richly steeped in history and rapidly changing with the westward expansion of the railroad. That early family would become the inspiration for Twelve Horses for Julia.

An engineer by trade, Lara lives in the windswept, rolling foothills of Southern Alberta―where the brave pioneers she writes about carved out lives for their families so long ago―with her two kids, three horses, and six cats (at last count).

Twelve Horses for Julia is her first book of historical fiction.