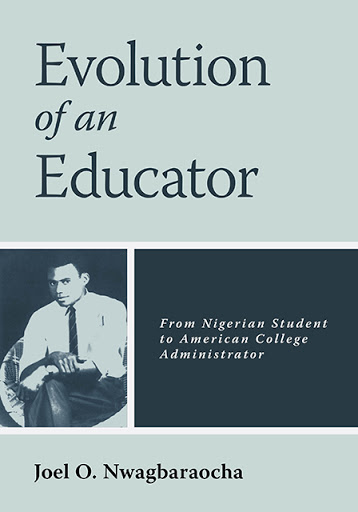 Evolution of an Educator
From Nigerian Student to American College Administrator
by Joel O. Nwagbaraocha

How does education shape a person’s worldview and ultimate success? How does the traditional British education system that was imposed on many African territories compare to the education system in the United States? What role did Historically Black Colleges and Universities play during the Civil Rights Movement in the United States? What role do they and other kinds of non-traditional higher education institutions play today? There is one man who is uniquely qualified to answer these questions – Dr. Joel Nwagbaraocha.

Evolution of an Educator is the story of a man whose education began in the British Cameroons and Nigeria, continued at Norfolk State University, a traditionally Black University in Virginia, and finished with a doctorate degree at Harvard. From there, Dr. Nwagbaraocha went on to have a stunning career in education that included 20 years of consulting at Historically Black Colleges and Universities, serving as an academic administrator and professor at three colleges and as president of a Liberal Arts College, and another twenty-five years at Strayer University as faculty, Provost and Chief Academic Officer, and Interim President. His story not only offers a unique perspective on higher education institutions but also is a very personal story about an African man who came to America with few belongings and no family, and yet found a way to both shape his own destiny and impact the American education system by espousing the principles of equality, integrity, and hard work.

An insightful and moving educational journey for Dr. Nwagbaraocha who my husband and I met and befriended when we were Peace Corps Volunteer teachers at Emmanuel College in Owerri, Nigeria in the early 60's. We encouraged and helped him to come to America to attend our Alma Mater, Norfolk State University, and the Norfolk Division of Virginia State College at that time. Little did we know that he would soar to such higher academic heights. ---REGINA E. CRAWLEY, Former Peace Corp Volunteer

Evolution of an Educator is a powerful, enlightening and inspiring read that documents an amazing life’s work of an extraordinary educator. Dr. Nwagbaraocha embodies an unrelenting commitment to excellence in his personal and professional educational endeavors. As detailed in his book, it is clear that Joel’s greatest gift to our civilization and humanity has been the tremendous impact he has made on institutions across the globe. ---CARL M. FLAMER., President Emeritus and Alumnus of Barber-Scotia College.

Dr. Nwagbaraocha clearly captured through his writing an outstanding description of the struggles of the nation’s historically black colleges in the 70’s and 80’s. He devoted much of his career as a catalyst for curriculum improvements and the improvement of general administrative processes of these colleges and universities. Joel has made a positive contribution in advancing the Common Good. A very interesting and outstanding professional journey. ---LEONARD HAYNES 111, PhD. Senior Advisor, Office of the Undersecretary, US Department of Education.

​The most engaging passages in the book are filled with personal descriptions and observations about Nwagbaraocha’s extraordinary life, including stories about his early education in Victoria (now Limbe), 50 miles from the foot of the Cameroon Mountains. His travels to Nigeria at age fourteen, during when he squeezed together with others on a wooden board in a merchant truck, are effective in conveying his fright. Other sections create a sense of immediacy and direct connection, as when Nwagbaraocha discusses feeling alone in a foreign country, missing his family, and needing to adjust to American food. ... The book ends with an implication that higher education can have a significant impact on fostering personal growth and strength.

Evolution of an Educator is a memoir that traces an accomplished professor’s exposure to international community, culture, diversity, and educational methods. --- Reviewed by Andrea Hammer, Foreword Clarion Reviews

Dr. Joel Nwagbaraocha was born in what is today Limbe, Cameroon to Nigerian parents. One of eleven children, he was the “experimental guinea pig of the family” and sent to a variety of government and private schools, including a boarding school, to ensure he received a top education. This quest for an excellent education ultimately brought him to the United States, where he earned a Bachelor of Science degree in Mathematics, a Diploma in Physics, and a Master's and Doctoral Degrees in education. He then used this education to shape and improve the education system itself.

Today, Dr. Nwagbaraocha lives in Columbia, Maryland with his wife, Patsy, who is also an educator. They have four adult children. Of his journey as an educator, he notes, “A fundamental lesson I learned is that higher education teaching and learning are essential human endeavors that result in further advancing civilization. It is crucial that this pursuit of excellence is unbounded by any such barriers as socioeconomic status, race, or creed.”