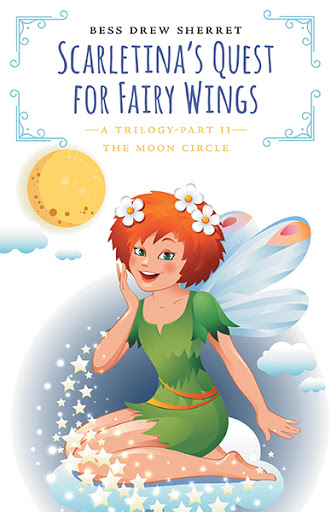 The Moon Circle is the second book in the Scarletina’s Quest for Fairy Wings trilogy. Children will want to read this book, and parents will need to share it; age doesn't matter as her story reaches everyone.

Both will love reading about Scarletina, a spunky, kind hearted and sometimes impetuous fairy who reflects many of the issues and difficulties that children face today. They will be enthralled by her exciting adventures and escapades and completely captivated by her life in Nightingale Wood.

Our plucky fairy will show that she doesn't always get it right, doesn't always behave the way she should and doesn't always feel brave and confident. What she does show is that these challenges can be overcome; sometimes it’s with the help of fairy and animal friends, but at other times she finds and uses her own hidden innate strengths.

These trials help her learn about loyalty, compassion, honesty, truthfulness and how the strength of love can be the most powerful and empowering of all emotions.

All these important elements are skillfully written into Scarletina's woodland life where her teachers are her family and friends and, of course, the all-important flowers and fauna that live there.

This is the second part of Scarletina’s journey to earn her wings. She has to graduate from the Moon Circle before she can progress to the Sun Circle, where her wings will unfold and she will learn how to fly.

Bess’s love of the written word was reinforced whilst performing in many of the world’s greatest playwrights; William Shakespeare, Oscar Wilde, Arthur Miller, Edward Albee, Eugene Ionesco, Paul Simon and Tom Stoppard. For over twenty five years she was able to learn from these masters, to appreciate how the rhythm and flow of the written word is as important as the words themselves.

Bess wrote to Edward Albee to comment on how she had noticed this in ‘A Delicate Balance’, she knew if she’d said an incorrect word because the rhythm would feel wrong. She was honoured and thrilled when he replied and wrote:

“I’m happy that playing Agnes in A Delicate Balance was a good experience for you. It is a complex play and role and the rhythms (which it would seem you found) are crucial.”

Bess inherently knows when her words don’t work together; she says it’s as obviously ill-fitting as trying to put the wrong piece in a jigsaw.

Bess has co-written a screenplay and filming is scheduled to begin in the U.S.A, 2019.

She is also co-writing a novel which the second film will be based on, and will then co-write the screenplay for the second part of the film trilogy.

A novel called Divine Inspiration with Chocolate, is due for release 2019.