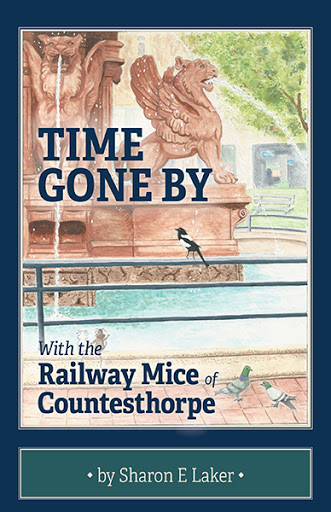 Time Gone By
With the Railway Mice of Countesthorpe by Sharon E. Laker

Time Gone By is a comforting children's tale about a group of mice faced with the death of a loved one.

This story is set in an abandoned railway station in the small village of Countesthorpe, Leicestershire, England.

After the group’s storyteller dies, Titania, the Queen of the Fairies, bestows the storyteller role on a naughty little mouse named Key.

At first the Railway Mice are confused and annoyed. Why did Titania give Key such an important role? Blackberry, the wisest mouse, asks the other mice to give Key a chance. “The Queen clearly sees something in Key that we don't,” she tells them.

At first Key is nervous, but everyone pulls together to support and encourage him. As he tells the exciting story of The Adventures of Harold Mouse, Key embellishes the tale with actions and slowly brings a ray of light into what had been a sad, dark time for the Railway Mice.

More than death, this story is about the celebration of life − living life to its fullest and caring for those around you.

Does Key succeed in his new role as the Railway Mice of Countesthorpe’s storyteller? Only time will tell. One thing for sure though, is Key's ability to keep everyone entertained with his bright and cheery personality. 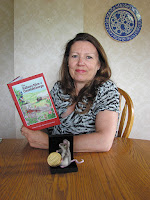 Award-winning author, Sharon E. Laker, was born in Leicester, England, and grew up in the village of Countesthorpe. She and her sister Kim frequently played around the village's old train station and in the farmland surrounding it. Sharon moved to Canada when she was nineteen and eventually made her home in Winnipeg, Manitoba. She attended the University of Manitoba and graduated with a bachelor's degree in Human Ecology and Psychology.

Today, Sharon lives on the coast of the Bay of Fundy, Nova Scotia, with her family and dogs.

Her first book, The Railway Mice of Countesthorpe, was awarded a bronze medal by the Wishing Shelf Book Awards in the UK.