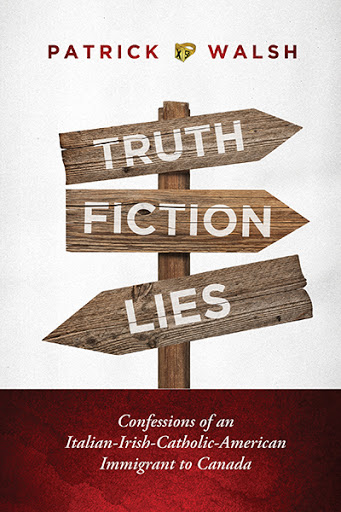 Truth.Fiction.Lies
Confessions of an Italian-Irish-Catholic-American Immigrant to Canada
by Patrick X Walsh

How could he be a good boy and a bad boy at the same time?

The TRUTH is what is. FICTION is not reality—but it can help us to see the TRUTH through stories, e.g., The Boy Who Cried Wolf.

LIES deceive, for evil purposes, and for good purposes. But what happens when what we think is the TRUTH turns out to be a LIE?

In his ninth decade, the author, who has spent his life creating FICTION to examine TRUTH, decided to write the story of his life, truthfully. But, in the process of examining his life—his prayers, works, joys and sufferings—he discovers it becomes more and more difficult to distinguish the TRUTH from the LIES. And the chief insights into the reality of a life he thought noble, his FICTION—often in the form of dreams—reveals his true nature as a failure in his professed faith—until a good woman shows him the way out of his dark forest.

In today’s world, how in hell do you tell TRUTH from LIES?

This guy spent his lifetime trying to figure it out.

Is he a SAINT or SINNER?

Professor Patrick Walsh, an award-winning teacher/dramatist at both St. Francis Xavier U, Antigonish, NS, and St. Mary’s U, Calgary, AB, married his stories and plays to his literary responsibilities and local material. He designed and wrote in The Antigonish Review. He wrote a novel: The Cave: A Story of Ireland, while pursuing his PhD there. A Canada Council grant enabled his Marriage a la Chaucer. A drama, Splits, won a U of Chicago contest, and his winning Bible Vigil for World Peace, was performed at the Festival of Religious Art, Sacramento, California. Louisbourg and Growing Up in Louisbourg, were the first dramas ever performed at the world-class reconstruction. The National Film Board of Canada & Teled produced his video drama, Thecla’s Choice. Mad Shelley, swept the awards at the 1977 Dominion Drama Festival., John W. Doull, Nova Scotia’s leading antiquarian bookseller declared The History of Antigonish,“The finest local history I have ever seen.” This book, a chronicle of the spiritual journey he has made in his 82 years, is a gift to his wife, his children and grandchildren, and all who enriched his life.