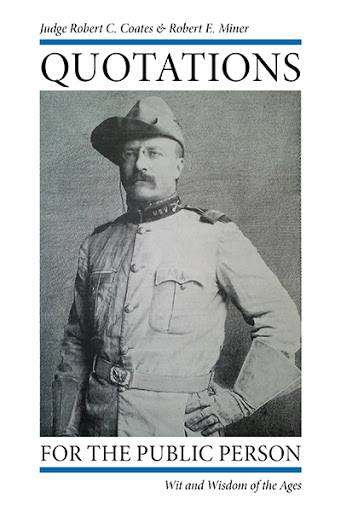 Quotations For the Public Person
Wit and Wisdom of the Ages
by Judge Robert C. Coates and Robert E. Miner

It is a good thing for an uneducated man to read books of quotations. Bartlett’s Familiar Quotations is an admirable work, and I have studied it intently. The quotations when engraved upon the memory give you good thoughts. They also make you anxious to read the authors and look for more.

Live your life as though your every act were to become universal Law. —Immanuel Kant

Those of you who will be truly happy are those who have sought, and found, how to serve.

I think it is required of a man that he should share the passions of his time at the peril of being judged not to have lived. —Oliver Wendell Holmes

In the midst of winter, I suddenly found there was in me an invincible summer.

Without criticism and reliable and intelligent reporting, the government cannot govern.

Our doubts are traitors, and make us lose the good we oft might win, by fearing to attempt. —William Shakespeare (Measure for Measure)

Before becoming a trial lawyer and judge, Bob Coates was a poet, geologist, and government administrator. He has been a leader in many organizations including Boy Scouts, Sierra Club, Rotary Club, and The Explorers’ Club. Coates has published five books and his book on solutions to American homelessness has been much awarded and is in its third printing.

Miner was a career professional engineer with a BS in mechanical engineering. He worked for forty years as a civilian for the U.S. Navy, involved in the design, construction, maintenance, and operation of naval shore facilities. His responsibilities included energy and environmental programs. Graduate work in management included courses in economics, philosophy, literature, political science, and history. He was a member of professional associations and a Toastmaster Club.

Coates and Miner were fraternity brothers. Both seekers looking for meaning, they began gathering quotations and aphorisms that rang true to them. Miner used a number of them in his master’s thesis. Together they amassed quite a file and now, five decades later, they have the opportunity to share their magnum opus with you.

This collection includes their personal favorites, and they feel that it will also appeal to you. The quotations cover a wide range of subjects and their authors span from Hammurabi to Yogi Berra. Coates and Miner found that these thoughts/ideas were of great benefit to them and could serve to help others. That is why they decided to publish this book!