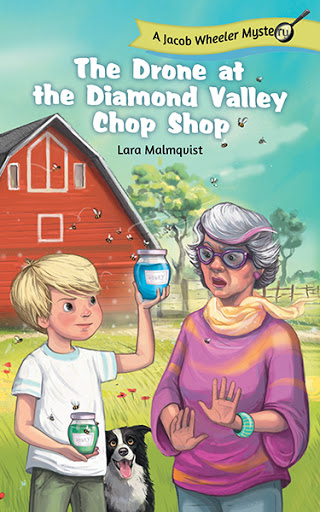 The Drone at the Diamond Valley Chop Shop
by Lara Malmqvist

When Jacob Wheeler arrives on a relative’s goat farm in southern Alberta, he bemoans the thought of spending his summer vacation stuck in the middle of nowhere with nothing to do except avoid Granny’s temper and his cousin Millie’s sarcasm.

But when Granny accuses Jacob of somehow turning the neighbour’s honey blue, Jacob realizes something mysterious is happening to local beehives. Farmers all over Diamond Valley are reporting honey in brilliant shades of blue, green, red, and yellow. Determined to prove his innocence, Jacob enlists Millie’s help as they search for clues. But local bullies, the Kreft twins, aren’t going to make it easy for them—maybe they have something to hide.

As Jacob’s case builds, he realizes the mystery of the beehives might reach far beyond coloured honey. As he learns about pollination and colony collapse disorder, he realizes some local hives might just be connected to the international crime ring that his grandpa, a world-renowned detective, is investigating in California.

Will Jacob solve the mystery of the tampered hives and clear his name before he has to leave the farm?

Lara Malmqvist works as an engineer and resides with her family, three dogs, four horses, and at last count, six cats on an acreage in the rolling foothills of southern Alberta, where each spring, the air is abuzz with honey bees from the nearby honey farm, as they venture out from their hives after the long, cold winter. The Drone at the Diamond Valley Chop Shop is the second book in her Jacob Wheeler Mystery series.