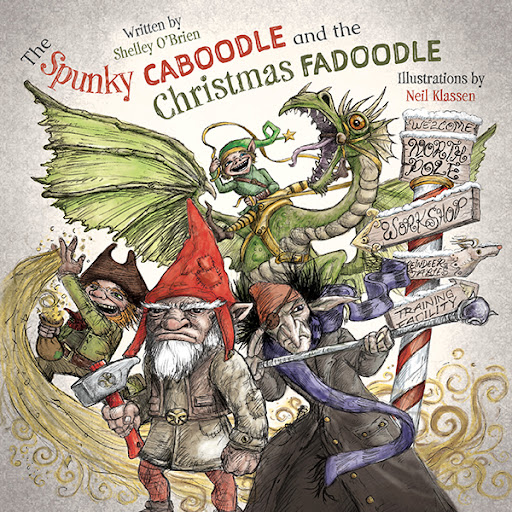 The Spunky Caboodle and the Christmas Fadoodle
by Shelley O'Brien

What is going on in Santa's workshop? Droopy swords, shrinking giants, and... farting ninjas?!?

A standard mission for the Spunky Caboodle and their trusty dragons… Or is it?

Humphrey Nudge, Barnaby Potts, Quinsy Wick, and Morley Patch on a riptalesnorter adventure to the North Pole as they use their powers to solve a crisis, catch the culprits and save Christmas!

Shelley O’Brien is an educator in southeastern Manitoba, whose love for all things fantasy-adventure led her to write her first children’s story. Her quirky verse is reminiscent of a meeting between Cindy Lou Who and Bilbo Baggins.

A self-described tree-huggin’, critter-lovin’, nature-groovin’ granola girl, the author lives in a field in the middle of nowhere with her husband, son, dragons, leprechauns, and pillywiggins.

Neil Klassen is a visual art educator and illustrator. He may look like a grown-up, but he never really got there. In secret, he is a knight, a monster slayer, and a dreamer. The illustrator is inspired by folklore, mythology, and legends, and also by the works of J.R.R. Tolkien, C.S. Lewis, and Brian Froud.

This is the first collaboration for Shelley and Neil.